Could 12,000 lawmakers fix what ails California?

The one thing m

ost Democrats and Republicans seem to agree on is that special interests have too much influence in politics. The little guy is feeling less and less relevant — especially at the voting booth. 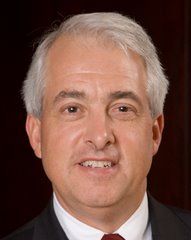 John Cox says the best way to fix this is by electing a larger Legislature. He's the author of the Neighborhood Legislature[3] initiative. I interviewed Cox for a third time since March[4] to follow up on his progress.

Because legislators have largely become professional fundraisers, and the individual voter has so little influence, Cox is working to develop a system to elect 12,000 state lawmakers in California, rather than the current 120, to allow for better representation, closer to home.

Cox anticipates his plan would take the big crony bucks out of campaigns, and allow neighbors to campaign door-to-door, in a real grassroots campaign. “You can do it with shoe leather and a few flyers,” Cox said.

For democracy to work, it must be representative democracy. It must be a government of, by and for the people.

With 38 million California residents, there are only 120 state legislators. There are nearly 500,000 residents for each member of the Assembly, and nearly 1 million per state Senator.

Districts this large cost candidates millions of dollars to win an election, leaving special interests, public employee and labor unions, and big corporations funding the bulk of the campaigns. As a result, average Californians are left out of the process.

Each member of the New Hampshire House, their version of our Assembly, represents only about 3,170 people. Chances are, New Hampshire elected officials know most of their constituents.

Yet New Hampshire legislators review more than 1,000 bills every legislative session — and do it for $100 in pay and a mileage reimbursement.

While New Hampshire is significantly smaller than California, people who spend excessively in New Hampshire on political campaigns don't win, according to Cox. The voters don't trust them.

All the Neighborhood Assembly Members are voting members. “The 80 that go to Sacramento are just a committee of the whole who do the nitty gritty work,” according to Cox.

So ultimately, the number of legislators would remain the same as today at 120. But the process of choosing them would be insulated from the powerful interests, and all members have voting power.

This is one way to hold elected representatives accountable. As it currently stands, most Californians don't know their representatives, nor will they ever meet.

The movement is growing thanks to “grassroots research,” according to Cox. He and his colleagues have been meeting with grassroots groups — Rotary groups, Kiwanis clubs, Lions clubs, and even smaller cities' Chambers of Commerce. They've been meeting with the neighborhood councils and community activists in Los Angeles, and have nearly 100 percent support from the groups.

Because the idea is so new, and the initiative isn't on the ballot yet, there really isn't any opposition. But objections likely will be to charge that we already have too many legislators, so multiplying them to 12,000 would make them even worse. Another objection likely would be that the process insulates the voters from directly electing a legislator.

“The status-quo political people say this initiative will fail,” Cox said. He's talking about the political consultants vested in things remaining the same. “But because the average person doesn't want his or her personal life splashed all over television, the same people always run for office,” said Cox. “But not with a Neighborhood Legislature. People are already signing up to run for office.”

Cox plans on having his initiative on the Nov. 2014 ballot.

He and his statewide coordinators will be in Los Angeles for a press conference Thursday morning as they submit the initiative for title and summary.

Cox said his initiative will be “the greatest peaceful transformation of power since 1776.”