BART strike is a teachable moment 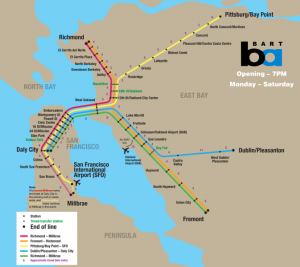 [1]Reactions from the press and public to the BART strikes this year have been overwhelmingly negative. In one of the safest Democratic strongholds in the U.S., there is serious talk of outlawing future BART strikes.

As reported[2] in the San Francisco Chronicle on October 19:

“That discussion has already begun, in letters from California lawmakers to Gov. Jerry Brown[3], from state Sen. Mark DeSaulnier[4], D-Concord, who said he is 'looking into legislation that could prevent future strikes,' a petition drive by a Democratic Assembly[5] candidate in the East Bay seeking the same, and a piece by editorial page editor John Diaz[6] in Sunday’s Chronicle supporting a Republican proposal that BART unions be made to honor the no-strike clause in their last contract.”

The aforementioned Democratic Assembly candidate is Steve Glazer, a “political strategist, longtime adviser to Gov. Jerry Brown and, most recently, city councilman in the prosperous East Bay suburb of Orinda.” In an October 15 article[7] in the San Francisco Chronicle, Glazer described himself as “a progressive Democrat who is fiscally conservative — supportive of public-pension reform and more business-friendly regulations, and willing to take on labor, the biggest special interest in the state.”

Glazer, reportedly among the top money-raisers statewide so far for next year’s Assembly races, went on to say that “Not one drop” of his campaign contributions has come from labor. “I’m redefining what it means to be a Democrat,” Glazer said.

By apparently recognizing that fiscal conservative values require taking on unions like those representing BART workers, Glazer is on to something. But how far will he take it?

When questioning the right of BART workers to strike, the underlying principle is that workers who hold monopoly power over a vital public service cannot be permitted to withhold that service, holding members of the public hostage, in order to extract concessions from management. This ability has served BART well over the years.

Here, taken from information provided to the California State Controller from their “Raw Export[8]” page (refer to “2011 Special District Data), with analysis from the California Public Policy Center available to download in an Excel spreadsheet[9], is how much the average full-time BART worker made in 2011: 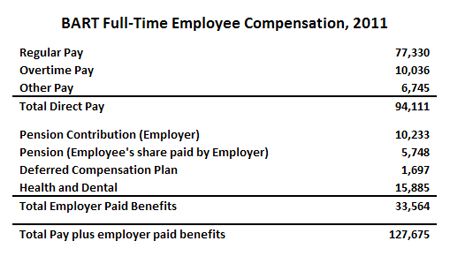 This is only part of the compensation, however.

Here, taken from a BART employment brochure[11], are the benefits offered BART employees: 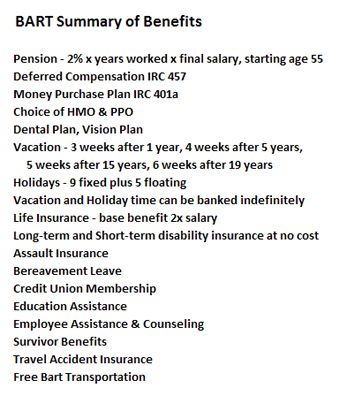 Nice work if you can find it. How many veteran workers get six weeks' paid vacation per year, plus 14 paid holidays, a generous pension (“2% at 55” equates to a retirement benefit at least three times better than Social Security) that costs them nothing, and health and dental coverage with an average value of $15,885 per year, for $92 per month? Plus long-term disability insurance, life insurance and a host of other benefits including unlimited free rides on BART?

If BART were a self-supporting, non-monopolistic entity, providing its unionized workforce with this sort of largesse would be a private matter between the employees and their management. But if you review BART’s 2013 Budget[13], you will see that, of the $672 million of total revenues expected in 2013, only $415 million comes from operating revenue — passenger fares, parking fees, etc. The other $257 million comes from taxpayers, mostly through sales taxes. BART’s biggest 2013 expense, by far, is the $381 million they have budgeted for labor.

Which brings us to a teachable moment.

BART’s compensation relies partially on the ability of its workers to strike. But unionized public-sector workers, who have only limited ability to strike, still benefit from binding arbitration rules, as well as major advantages that BART’s unions do not have — they elect their management. California’s public-sector unions collect and spend more than $1 billion per year, with about one-third of that (a staggering amount) going to explicitly political activity, but nearly all of it used to advance a political agenda — how we manage our public agencies.

The financial consequences of the ability of public-sector unions to decisively influence the election of politicians they negotiate with should be obvious by now, especially to “fiscal conservatives,” regardless of their party. Here are a few examples of the average total compensation — direct pay plus employer paid benefits — for California’s city workers:  San Jose[14] — $149,907, Anaheim[15] — $146,551, Costa Mesa[16] — $146,863, Irvine[17] — $143,691.

And here is a study[18] showing California’s total state and local government debt, when you include the present value of unfunded liabilities for pensions and retirement health care at realistic rates of return, to exceed $1 trillion.

What politicians and voters need to understand is that public-sector unions wield leverage even more potent than BART’s unions. This leverage has resulted in an overpaid public-sector workforce and potentially catastrophic levels of state and local government debt.

So what will fiscally conservative Democrats do? What will voters do?

Ed Ring is the executive director of the California Public Policy Center[21].