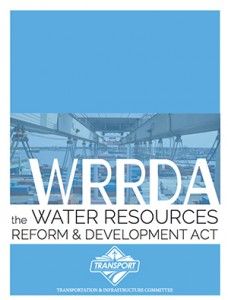 [1]Is it possible to imagine this kind of water bill[2] coming out of Congress? It would:

This actually is what the U.S. House of Representatives claims its new Water Resources Reform and Development Act of 2013, HR 3080, would accomplish. A brochure explaining the bill can be found here[4]; the full text is here[5].

The bill would need to be combined with S. 601 in the U.S. Senate and signed by President Obama before it could become law.  But the bill had overwhelming bipartisan support in the House on a vote of 417 to 3 this past week.  A major difficulty in merging and approving both bills [6]will likely depend on whether projects can still be selected by the U.S. Army Corps of Engineers as provided in S. 601, or by the House as provided in HR 3080.

What California would get

In a nutshell, here is what California would get out of HR 3080:

What California would lose

And here is what California would lose from provisions in Title III of the bill to de-authorize $12  billion in funding for previously approved water projects for which there is lack of local support or federal resources:

Natomas[11] is an under-developed area of northwest Sacramento.  Half a dozen land developers own the 10,000-acre section of Natomas called “Natomas Joint Vision.”

Because of the potential liberation of the land from flooding, Natomas could reportedly see land values climb 300 fold[12].  What Sacramento also is getting out of HR 3080 is land for the next housing cycle worth billions of dollars.

Perhaps more importantly, there is no authorization of additional funding for Feinstein’s $1 billion San Joaquin River Restoration Project[13].  Funding approval for this project came only in 2009-10, when Democrats had the presidency, the House and a supermajority in the Senate.

But continued funding for the project has been stymied since Republicans took back control of the House in 2011.  The San Joaquin River Restoration Program has been funded by $200 million in state water bonds[14] and the diversion of funds from added water charges on farmers from the Federal Central Valley Project[15].

Taxpayers for Common Sense[16] has opposed HR 3080 because “the legislation contains several provisions that would sacrifice the pursuit of water projects benefitting national interest in order to advance more parochial, narrow, and potentially lower priority projects.”

A bone of contention for the group is that the criteria for calculating flood damage reduction have been expanded so that federal tax dollars are being spent to achieve local and regional benefits, not national interests.  This might be called a backdoor earmark.

Probably the most intriguing aspect of HR 3080 is its wildcard provision to undertake unspecified projects with contributions from “non-federal interests.” California has recently delegated the environmental clearance portion of its High-Speed Rail Project to the federal government[18] to circumvent the “project killer” provisions of the California Environmental Quality Act.  This leaves open whether the environmental portion of California’s other water projects — the proposed Delta Tunnels and the Bay Delta Conservation Plan — could also be folded under federal control to escape years of litigation.

In a Congress that has a public image as divided and gridlocked over the federal debt, HR 3080 shows that bipartisanship still exists, especially when it comes to water projects loaded with speculative real estate potential.