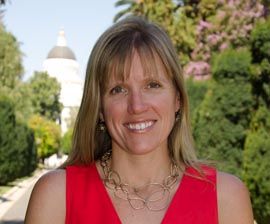 [1]In the dog-eat-dog world of Sacramento politics, no one is off limits. Not even man’s best friend.

Last Friday, the San Francisco Chronicle featured a front-page story[2] by newshound Carla Marinucci about an arrangement between the governor and an influential lobbyist. Jennifer Fearing, the Humane Society’s top dog in Sacramento, regularly walks Sutter, a loveable corgi with a massive Twitter[3] following under the care of Gov. Jerry Brown.

This is hardly a “man bites dog” story.

Two weeks ago, CalWatchdog.com’s Katy Grimes, who is like a dog with a bone when it comes to rooting out the Capitol’s nefarious activities, first reported on the arrangement[4]. Critics are barking that, because Fearing is a lobbyist, her volunteer dog-walking should be classified as a gift that is subject to the state’s gift limits.

“Is there a conflict of interest with such a close relationship between a lobbyist and a governor?” asked Jennifer Kerns, the publicity hound for Free California, a gun-rights group that routinely gets into a dogfight with the Humane Society. “There are services being provided, and those services have monetary value.”

The San Francisco Chronicle story[5] unleashed thousands of comments from online attack dogs. This morning, the dog and pony show continued with another biting piece from the Washington Times, which reported that a formal ethics complaint could be in the works.

“Gun-rights and hunting groups are considering filing a complaint over the pro bono dog exercising with the state’s Fair Political Practices Commission,” the Times noted[6].

Exempt as “Act of Neighborliness”

Fearing’s ankle-biters will likely prove to be the barking dog that never bites. That’s because the Fair Political Practices Commission, which is responsible for bringing lobbyists to heel, has exempted “acts of neighborliness” from the state’s gift limits. Regulation§ 18942[7], which identifies exceptions to the gift limits, includes:

Acts of Neighborliness. A service performed, such as a loan of an item, an occasional needed ride, personal assistance in making a repair, bringing in the mail or feeding the cat while the official is away, and other similar acts of ordinary assistance consistent with polite behavior in a civilized society that would not normally be part of an economic transaction between like participants under similar circumstances.

Campaign watchdogs say that critics haven’t a dog’s chance of proving that the arrangement violates this “act of neighborliness” exemption.

“This activity would fall under the FPPC’s new ‘act of neighborliness’ exemption, so there doesn’t appear to be any violation of ethics,” said Phillip Ung, a policy advocate for California Common Cause. “I doubt they will lay down the hammer on dog walkers.”

There’s also the fact that the dog isn’t even the governor’s.

Sutter was left in the governor’s care when Kathleen Brown, the governor’s sister, moved to Chicago in 2010. “The dog is happily situated,” the former state treasurer told the Sacramento Bee[8], “and I wouldn’t presume to disintermediate his celebrity status and special relationship with the first lady and the governor.”

If anything, Fearing’s dog-walking constitutes a gift to Kathleen, who is no longer a public official.

Fearing, who has always been open about her gubernatorial dog-walking, says that she’s a friend to all animals.

“I do occasionally watch Sutter — a neighborly activity that I enjoy,” Fearing told CalWatchdog.com. “Ask any dog, I’m pretty fun. And yes, he sleeps on the bed.”

Never one to let sleeping dogs lie, CalWatchdog.com hounded one of Fearing’s friends to confirm that she, in fact, helps other less-politically connected animals.

“Whenever I need a hand with dog walking, feeding when I can’t make it home on time, or even hen bathing — I kid you not, it has happened!– Jennifer has always volunteered to help out if she’s available,” Kayte Fisher, one of Fearing’s animal-loving friends, told CalWatchdog.com. “I have only ever repaid her with soup delivery when she’s sick or invitations for dinner at my house.”

If her critics in the political opposition hadn’t been as lazy as a dog, they’d know that Fearing’s neighborliness extends to everyone.

So what’s the real motivation behind this Brown Dog Affair?

“Fearing scored a perfect 6-for-6 record this legislative season in getting bills signed by Brown, placing her in the ranks of Sacramento’s most effective lobbyists,” the San Francisco Chronicle reported[9].  “Among the coups for the Humane Society was legislation banning lead ammunition that Fearing said endangered as many as 130 species in California.”

This session, Fearing and hunting groups fought like cats and dogs over a bill to ban lead ammunition. AB711 was opposed by, among others, the Sacramento sheriff, game wardens and hunters. Opponents contended that the lead ban wouldn’t help endangered species, but would kill thousands of jobs associated with the hunting profession.

Even if you don’t have a dog in this fight, there are plenty of reasons to object to putting Fearing in the doghouse. While reporters are busy barking up the wrong tree, they’re not sniffing out genuine conflicts of interest in Sacramento.

“State politics is a billion dollar business with millions more spent at the local level,” said Ung, whose organization tracks special interest spending in Sacramento. “I think voters would want us to focus on those who plot in the shadows not dog walkers in Capitol Park.”

Time to call off the dogs.