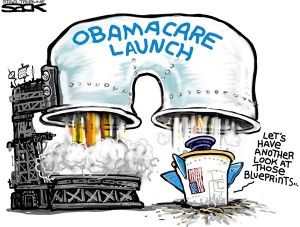 [1]The government shutdown — which dominated the headlines and did severe damage to the Republican Party’s brand — has now been over for nearly two weeks. America’s eyes have since turned to the Affordable Care Act, better known as Obamacare.

Much of the early media coverage focused on the rollout of the federal health care exchange website, which was designed for Americans without health insurance to shop for different plans in a central location. Depending who is speaking, the rollout has either been an unmitigated disaster or a rocky start for a complex new system — though the former is certainly a more popular descriptor.

Either way, liberals and conservatives both acknowledge[2] that the federal website needs serious improvement. The Obama administration has endured sustained criticism over the website, and it doesn’t look much better for many state websites.

President Obama, who has staked much of his presidential legacy on the success of the new health care law, insists that the law will become broadly popular once the website failures are resolved. But new reports have shed light on other aspects of the law which threaten to overshadow the already significant problems associated with the websites.

First, consider the rate shocks. The great pitch behind Obamacare is that it would lower insurance premiums for most Americans. Many Americans would see their rates go up, and poorer Americans could qualify for subsidies to help cover their costs. Now that those changes are beginning to take effect, many are having second thoughts about the law.

The LA Times has done an excellent job reporting on rate shocks[5]:

Thousands of Californians are discovering what Obamacare will cost them — and many don’t like what they see.

These middle-class consumers are staring at hefty increases on their insurance bills as the overhaul remakes the health care market. Their rates are rising in large part to help offset the higher costs of covering sicker, poorer people who have been shut out of the system for years.

“This is when the actual sticker shock comes into play for people,” said Gerald Kominski, director of the UCLA Center for Health Policy Research. “There are winners and losers under the Affordable Care Act.”

One of the “losers” of the health care law is a writer for the ultra-liberal Daily Kos blog, who expressed his dismay[6] with the new law once he realized how much his insurance premiums would be going up:

My wife and I just got our updates from Kaiser telling us what our 2014 rates will be. Her monthly has been $168 this year, mine $150. We have a high deductible. We are generally healthy people who don’t go to the doctor often. I barely ever go. The insurance is in case of a major catastrophe.

I am canceling insurance for us and I am not paying any f***ing penalty. What the hell kind of reform is this?

Asked by Fox News’ Ed Henry[7] to explain why so many Americans were losing their plans, when the President had insisted for years that they wouldn’t, White House spokesman Jay Carney said:

“So, it’s true that there are existing health care plans on the individual market that don’t meet those minimum standards and therefore do not qualify for the Affordable Care Act.”

And, as it turns out, the White House has known for years[8] that between 40 percent and 67 percent of individual policy holders would lose their coverage because of the new health care law and the standards it created.

Meanwhile, a new report from CNN Money[9] also suggests that Obamacare might not actually reduce the federal deficit as it was supposed to — another major selling point of the law which is seemingly failing to come to fruition.

But, with all of these problems, it’s important to keep perspective. Most Americans don’t follow the news closely, and they’re out of the loop with day to day developments. In fact, according the Memphis Business Journal, 47 percent of uninsured Americans aren’t even sure where to get information about Obamacare[10] and how it will affect them.

It seems the ultimate popularity of the health care law might just rely on how uniformed Americans are.