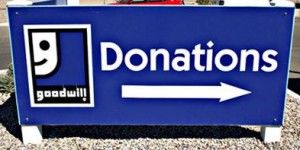 [1]Disability advocacy groups throughout the country are planning a sizeable delivery to Goodwill Industries today. But, instead of secondhand clothing or gently-used goods, the disability rights groups will be dropping off thousands of signed petitions from citizens who are demanding that the nonprofit clean up its labor practices.

More than 100 Goodwill entities nationwide employ workers through the Special Wage Certificate program, a Depression-era loophole in federal labor law that allows organizations to pay subminimum wages to people with disabilities. In May, a Watchdog.org investigation[2] revealed that these same Goodwill entities that use the special wage program simultaneously spent $53.7 million in total executive compensation.

In an effort to increase public awareness of Goodwill’s labor practices, the National Federation of the Blind and Autistic Self Advocacy Network sponsored a Change.org petition[3], which has gathered more than 170,000 signatures. The organizations will be delivering petitions to Goodwill headquarters and stores in Sacramento, CA; Providence, RI; New York, NY; Corpus Christi, TX; Rockville, MD; and Seattle, WA.

“Over 170,000 Americans have joined us in our fight to ensure that workers with disabilities are paid a fair wage,” Dr. Marc Maurer, president of the National Federation of the Blind, told CalWatchdog.com. “We thank all those who signed the petition for standing up to Goodwill and urging the retailer to end its unfair and immoral payment of subminimum wages to disabled workers.”

Under Section 14 (c)[4] of the Fair Labor Standards Act of 1938, employers can apply for a special wage certificate that allows them to hire people with disabilities at a subminimum wage. Nationally, more than 300,000 workers are subject to the law. Goodwill uses the special minimum wage exemption to take advantage of 7,300 of its 105,000 employees.

Goodwill says that the subminimum wage program is a tool for helping the disabled.

“With 80 percent of working age adults with disabilities in our country not participating in the workforce currently, we believe that it’s important to explore more types of opportunities,” Brad Turner-Little[6], the director of mission strategy at Goodwill International Inc., has repeatedly said in public statements on the issue. “The special minimum wage certificate is a tool to create employment for people with disabilities. It’s not the only tool.”

However, that argument doesn’t sit well with petitioners. “This is disgusting info!” wrote Jeanne Green of Riverside, who signed the petition and added her own comments. “It is 2013, for Heaven’s sake!! WHY hasn’t this OLD-OUTDATED pay scale been challenged before now?”

For some signers, it’s more personal. “I have signed the petition as the proud mother of a son with autism,” said Amy Mais, a neighborhood activist, who has battled Goodwill’s bin bullying tactics[7] in Phoenix.

The organizations hope that the public awareness campaign will increase support for federal legislation to end the controversial policy. Rep. Gregg Harper, R-Miss., has introduced the Fair Wages for Workers with Disabilities Act of 2013, to close the subminimum wage loophole.

“The 170,000 people who have put their name to this petition show the broad scope of the outrage against Goodwill’s unfair and unethical practice of paying thousands of disabled workers less than minimum wage,” said Ari Ne’eman, president of the Autistic Self Advocacy Network, a co-sponsor of the petition drive. “We urge Goodwill to hear these voices and reconsider this discriminatory practice.”

According to the May 2013 Watchdog.org investigation, Goodwill of Southern California paid more than $1.1 million in total compensation to its then-CEO, making him the highest paid Goodwill executive in the country. The following month, an NBC investigation of Goodwill[8] repeated the findings.

Last year, CalWatchdog.com first reported that five California-based Goodwill charities[9] pay hundreds of employees less than minimum wage, while providing lucrative compensation packages to top executives. While the organization cries poor when it comes to workers’ wages, it has no problem spending money on online advertisements defending its labor practices.