Fracking: California should learn from Britain’s change of course

When it comes to green propaganda about hydraulic fracturing, it’s been a dead heat between New York state and Western Europe as to where the alarmists had the most clout.

Mostly because of Gov. Andrew Cuomo’s dithering[1] and pandering,  nothing seems to be changing in the Empire State, where a fracking moratorium is looking more and more permanent. 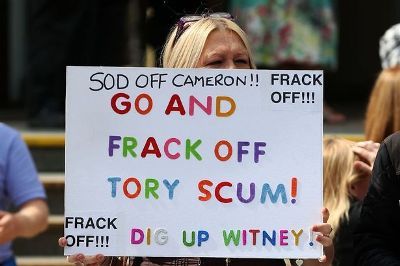 But Europe is having second thoughts about its green energy policies.

First came the stories about the crushing economic burden facing Euro nations because of the forced shift to renewable energy[2]. This, of course, has deep implications for California and its AB 32 experiment.

Now comes along another story with implications for the Golden State and its nascent efforts to regulate fracking and bring the Monterey Shale’s vast oil wealth into our economy. A once-deeply skeptical British government now says fracking is safe[3]. This is from Reuters:

“The risks to public health from emissions caused by fracking for shale oil and gas are low as long as operations are properly run and regulated, the British government’s health agency said on Thursday.

“Public Health England (PHE) said in a review that any health impacts were likely to be minimal from hydraulic fracturing, or fracking, which involves the pumping of water and chemicals into dense shale formations deep underground.

“Environmental campaigners have staged large anti-fracking protests in Britain, arguing that it can pollute groundwater and cause earthquakes. …

“Since there is currently no fracking in Britain, the PHE report examined evidence from countries such as the United States, where it found that any risk to health was typically due to operational failure.

“The currently available evidence indicates that the potential risks to public health from exposure to emissions associated with the shale gas extraction process are low if operations are properly run and regulated,” said John Harrison, director of PHE’s center for radiation, chemical and environmental hazards.”

Which brings us to another angle with implications for California. British regulators consulted with U.S. regulators. And surprise, surprise, the Obama administration experts said what they’ve said for years: fracking is just another dirty heavy industry that can be made tolerable with basic regulations.

The angle for California here? The astounding newspaper blackout in the Golden State of the fact that the Obama administration considers fracking safe.

Here’s a look at egregious “analysis”[4] by the Sac Bee’s Tom Knudson.

Here’s a look at the staggering breadth of Obama-fracking-view-omitters[5] on the staff of the L.A. Times.

Here’s a look at the single most stunning example of California media disinformation on Obama and fracking, which contrasts how the L.A. Times covered a press conference on fracking with Obama’s commerce secretary[6] with how the New York Times covered the same event.

Bias in reporting rarely is easier to document than this: The vast majority of CA reporters covering fracking never even mention that the administration of the greenest president in history thinks that it is safe.