“Please join us in protecting our coast and ocean by sending the Coastal Commission[1] a message today: DENY THE HUNTINGTON BEACH OCEAN DESALINATION FACILITY AND ENSURE THAT THIS PROJECT, AND THE MANY MORE TO FOLLOW, WON’T DESTROY PRECIOUS MARINE LIFE AND HABITAT!”

So screams an online appeal by the Surfrider Foundation[2] to its “powerful activist network,” which apparently is OK with the ocean being used for recreation but not for purposes of providing water usable by Orange County’s more than 3 million residents. 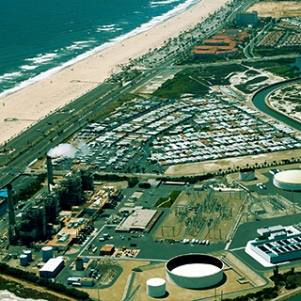 At its Nov. 13 meeting in Newport Beach, the state Coastal Commission will consider a challenge to plans by Poseidon Water[3] to build a seawater desalination plant six miles up the road in Huntington Beach that will produce 50 million gallons of freshwater a day, enough to cover roughly 8 percent of the county’s needs.

Executives for Poseidon, a private company headquartered in Boston, with a  West Coast office in Carlsbad, say the Huntington Beach desal facility will be the largest,  most technologically advanced and most energy efficient not only in California, and not only in the United States, but in the entire Western Hemisphere.

The project has an estimated price tag of $899 million and the taxpayers of neither Huntington Beach, nor Orange County, nor the state of California will foot the bill. Instead, Poseidon will go to the bond market to finance the build.

It is because of the promise of increasing the supply of water to residents of the nation’s sixth-largest county, and because much of the cost will be borne by Poseidon, that the county’s 11 representatives in the state Legislature, Democrats and Republicans, recently sent a letter to the Coastal Commission backing the proposed desal plant.

But none of that matters to Surfrider, which thinks it knows better than Orange County’s 11 elected representatives in Sacramento how the commission should vote on the Huntington Beach desal project.

Indeed, Surfrider claims that Poseidon’s plant design for Huntington Beach “would set the lowest possible standards for protecting our coast and ocean.” The group frets that the proposed plant might “unnecessarily kill marine life.”

It warns that discharge of highly concentrated brine into the ocean “degrades water quality and marine life habitat if not properly diluted.” And it cautions that ocean desal is “the most energy-intensive and expensive water supply option in California.”

What may not be known to many, if not most, of those attending the Coastal Commission’s Nov. 13 meeting — that is, those who are not members of Surfriders’ “powerful activist network” — is that the plant design for Poseidon’s Huntington Beach desal plant that supposedly would set the “lowest possible standards” is almost identical to the design the commission previously approved for Poseidon’s Carlsbad desal plant.

As to the threat the Huntington Beach plant poses to marine life and habitat, Scripps Institution of Oceanography[4] coastal engineer Scott Jenkins and marine biologist Jeffrey Graham concluded that “the science has demonstrated the effects of the desalination facility on the marine environment are benign.”

The amount of energy to produce enough desal water to meet a family’s need for a year is no more the energy need to run a refrigerator for a year. And the Orange County Water District estimates that desal water would increase residential water bills 7 percent in 2017, which works out to $3.50 on a $50 water bill.

It remains to be seen whether the unelected state Coastal Commission overrides the will of the county’s duly elected state representatives.