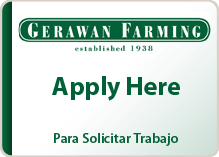 [1]Gerawan Farming workers just won a huge battle against the United Farm Workers — they are finally going to get the chance to vote on whether or not to allow the UFW to represent workers or to send the UFW packing.

Twice the workers have asked for an election, and both times the California Agricultural Labor Relations Board sided with the UFW against the workers and said “no.” But Friday, the ALRB reversed its decision.

The UFW won an election to organize Gerawan Farming more than 20 years ago but has been silent ever since. Certified by the ag labor board in 1990, the UFW held only one meeting a couple of years later, then abandoned the farm due to lack of worker support. There was never a contract.

So when the UFW, needing new dues-paying members, showed up in October 2012, claiming Gerawan Farming’s 5,000 employees were de facto union members, the workers were furious.

“We never certified the union,” said Silvia Lopez during an interview on KMJ radio with host Ray Appleton on Friday. “Why do we have to certify the union? This is a question for Jerry Brown.”

“I tried to contact the governor, but couldn’t,” Lopez said. “The only thing we want is to vote.”

Does the Ag labor board have an agenda?

Lopez collected signatures to petition the Agricultural Labor Relations Board [4]for decertification of the UFW. She turned in 2,000 signatures Sept. 19. The ALRB rejected her petition and said most of the signatures were forged.

Within 24 hours, Silas Shawver in the Visalia ALRB office said Lopez turned the petition and signatures in too late to be valid.

But then the Sacramento ALRB overturned Shawver’s decision and said the workers could have an election, within seven days of submitting the signatures.

But on Thursday, Oct. 31, Shawver announced his decision to block the decertification election.

Angered and frustrated, 1,000 workers protested at the Visalia ALRB office Friday, demanding the right to vote.

On Friday, Nov. 1, workers received word from the ALRB they could have their election Tuesday, Nov. 5.

‘They have a right to vote’ 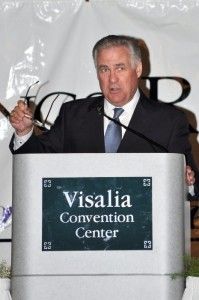 Assemblyman Jim Patterson, R-Fresno, is also angry. “The workers have been entirely ignored by the very people and political leaders supposed to be representing them,” he told me. “The ALRB is a rogue agency now, entirely biased and out of control.”

Patterson, shown at right, wrote a letter to Gov. Jerry Brown[6] expressing his support of the farm workers and urging Brown to intervene with the ALRB.

“It is the governor’s responsibility,” Patterson said. “He authored and signed the enabling legislation. It’s an absolute obligation to meet with these people. They have the right to vote.”

Patterson said he would work toward legislation reining in the rogue ALRB. “They cannot treat people like this,” he added. “I’m just amazed the governor has not intervened.”

Patterson said he was particularly disgusted at the silence of Assembly colleagues who represent the Central Valley. “I’ve reached out to Assembly Democrats Henry Perea and Rudy Salas on a number of occasions,” he said. “The silence is deafening.”

“This is what one-party rule looks like,” Patterson said. “This is the consequence of a supermajority of one party. And it’s an abuse of power.”

The United Farm Workers[7] sponsored a bill earlier this year by Sen. Darrell Steinberg to grant the union advantages given to no other union in California, such as forcing employers into constant, repeated mediation.

SB 25 was specifically targeting six of the state’s largest farms in order to assume control of the workers, and thus instantly triple UFW membership.

But the farm workers who found themselves impacted by this law did began to fight. Silvia Lopez and thousands of Gerawan workers fought against the attempted takeover.

Even lawmakers from farming regions would not vote for SB 25. Unable to get the bill passed out of both houses of the Legislature, Steinberg sent SB 25 to the inactive file in September.

But that did not end the union troubles for the farm workers, or for Gerawan Farming.

Ag board in ‘cahoots’ with union?

Because Silas Shawver, the ALRB regional director in Visalia, refused to document and publish the total signatures on the first petition Lopez submitted, his decision to dismiss the petition looked subjective and suspicious.

Lopez told me ALRB officials, including Shawver, personally met with more than 2,000 Gerawan employees at the farm before the first election so the ALRB could inform the workers of their right to ask for an election.

Given that the ALRB witnessed firsthand the interest of the workers in an election during that meeting, Shawver’s ruling invalidating the signatures was troubling to many.

And so was the UFW’s statement to me:

“The ALRB issued a 12-page report which dismissed the workers’ petition,” said UFW communications director Maria Machuca[9], when I called her following the first election. ”It was just a small group, the petition, and included forgeries and company involvement, which is illegal.”

“The ALRB invalidated the Gerawan decertification petition based on illegal employer involvement,” Machuca added in an email following my call. “In its review of the petitions signed by employees, the ALRB found a substantial number of forged signatures.  Nothing demonstrates more disrespect for employees than forging their signatures on a legal document.”

As this story unfolds the seeming relationship between the ALRB, a government agency, and the UFW, a union, continues to be of interest.

In a recent CalWatchdog story[10], I explained: “During an August 21, 2013 court proceeding, Judge Jeffrey Y. Hamilton said, ‘So the court is very suspect of, one, the ALRB’s position here.  It almost seems like it’s in cahoots.  And the court finds it very troubling that the ALRB is taking such a position, especially sitting in a prosecutorial role.’”

More to come on this story as it develops.