Through another executive order, President Barack Obama has created a new environmental council that’s sure to  expand government’s role in how Americans use their own property and land, water and even energy sources. A prominent California mayor is going to be one of Obama’s new climate commissars. 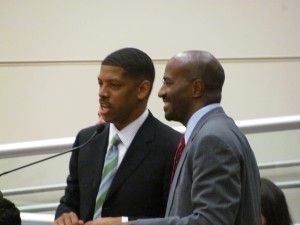 According to a press release[2] sent  out Friday by his office, “In recognition of Sacramento’s leadership in preparing for the impacts of climate change, Mayor Kevin Johnson was selected as a member of President Obama’s Task Force on Climate Preparedness and Resilience.”

Titled “Preparing the United States for the Impacts of Climate Change[3],” the new executive order was issued at a strange  time — much of the rest of the world has finally caught up to the fact that global warming is a fraud, and based on a myth. 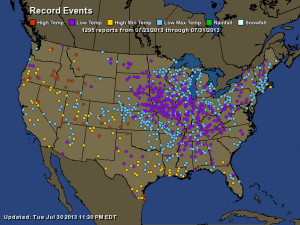 “Average temperatures have leveled for more than a decade, despite the sharply rising use of carbon energy in China and other countries,” the Daily Caller reported[5]. “U.S. use of carbon energy has stabilized with increasing market-driven efficiency and tightening regulations.”

Bypassing Congress once again, the executive order will be implemented by Obama’s czars and appointees.

The council is officially intended “to prepare the nation for the impacts of climate change by undertaking actions to enhance climate preparedness and resilience.”

“Our top priority is the public safety of our citizens today and in the future when the impacts of climate change intensify,” Johnson said. “Building resilient communities, and the co-benefits of job creation, risk reduction and improved public health that result will be among the topics I bring to the discussion with my fellow Task Force members.”

Johnson was elected in 2008 as a business-friendly mayor. But things changed after he took office — he turned left and green. As part of a statewide push on climate change, global warming and alternative energy creation, Johnson created “Greenwise[8],” to try to turn Sacramento “into the greenest city in the country.”  Greenwise hosted monthly meetings, including having the controversial Van Jones [9]as a featured speaker.

Obama appointed Jones  in March 2009 to the newly created White House “Green Czar” position, in which he acted as a special adviser for green jobs. Jones resigned just six months later after news surfaced about his past activism, including controversial statements about government involvement in the Sept. 11, 2001, attacks on the World Trade Center.

“In addition to bringing more frequent and severe storms, floods, heat waves and wildfires, climate change caused by carbon pollution can also increase the risk of asthma attacks and other illnesses,” Johnson’s press release claims. It’s dire, I tell you.

But July in the USA ended on a frigid note as record cold outpaces warmth nearly 10 to 1[10], news reports said. Don’t tell that to KJ, though.

“The Sacramento region is already contending with a history of floods, droughts, wildfire and severe heat with local impacts projected to worsen over time,” said Johnson’s press release[6].

The American River river system runs from the crest of the Sierra Nevada mountain range to its confluence with the Sacramento River in Sacramento.

The levees along the two rivers have historically been poorly maintained by the federal government. And decades of corrupt Sacramento politics have led to crony developers developing the Natomas region, a large housing development neighborhood north of downtown Sacramento. The area is bordered by the American and Sacramento Rivers. The Natomas area is a flood plain protected only by aging and crumbling old levees.

The area is extremely vulnerable to annual flooding, as well as severe flooding when there is a levee break, as happened in 1986. I remember it well as I helped an elderly family member try to save his home during the 1986 flood with sandbags — to no avail.

And now, it appears Johnson is already moving to impose restrictive and unnecessary water limitations on Sacramento residents separate from his role on the president’s council.

“The city of Sacramento is positioning itself to become the capital region’s water conservation leader, a dramatic shift after decades of opposition to even basic conservation ideas likewater meters,” the Sacramento Bee reported[11] Sunday. “On Tuesday, the City Council unanimously adopted a 150-page water conservation plan that will invest millions of dollars in a host of new measures, some normally associated with thirsty desert cities.”

But as the Bee reports, “The city is being nudged down the road to more aggressive conservation by two different California laws.”

One was authored by Democratic Senate President Darrell Steinberg, a former Sacramento councilman.  SB 7[13], passed and signed into law in 2009, requires all water suppliers to increase water-use efficiency. How’s that for a broad and overarching law?

“Sacramento faces a state deadline of 2025 to install water meters on all its residential customers or it could face penalties. The city resisted metering for decades: The city charter dating to 1921 actually banned water meters, and every City Council member in 1991 opposed a new state law that required meters on new homes,” the Bee reported[11].

Yet there are many communities in Southern California which are not water-metered. And, California does not collect and store water runoff. Most of the state’s water ends up running into the ocean.

Start with water collection and shortage

If politicians were serious about water conservation, they’d start with water collection and storage. Since this is rarely discussed, it is evident these water restrictions are designed to control land and homeowners.  How will elderly homeowners be able to afford large water bills? They won’t. Many will be forced to move into apartments or communities for the elderly.

Steinberg sold Sacramento down the river before the rest of the state in order to control the source of the water. And now it appears as if Johnson will as well.

Sacramento must install about 110,000 meters by 2025, at an estimated cost of $350 million, or it could be declared ineligible for state grants.

The city of Sacramento is the biggest water waster. The city’s parks allow broken sprinklers to run all night. The sprinklers continue to run during the rainy season.  Johnson should start cleaning his own house before he sets his sights on the city’s responsible homeowners and businesses, operating as Obama’s newest climate change soldier.