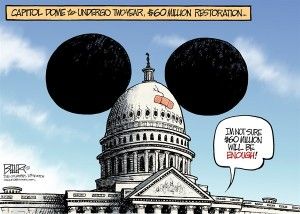 [1]Typically, congressional delegations can be divided into two camps, Republicans and Democrats. Some smaller states — such as Massachusetts or Rhode Island — are only represented by one party. But more populous states like Texas and Illinois typically bring both Republicans and Democrats to the House, even if the state as a whole is decidedly blue or red. The California House delegation, for example, is composed of 38 Democrats and 15 Republicans.

Partisan congressional delegations typically stick together, as they share not only a party and general political ideology, but the interests of the state they represent. But as the chasm between moderates and conservatives grows, California’s Republican delegation is slowly becoming more of two delegations.

Consider how different California Republicans handled (and are handling) two of the most politically charged issues in our country today.

First, consider the government shutdown. All of California’s Republicans voted to defund, and then to delay, Obamacare — prompting the shutdown to occur. But as the days went on, and it became clear that Republicans were taking a political hit for closing the government over Obamacare, some Republicans began to openly criticize their party.

Rep.  Devin Nunes of Tulare, a moderate, compared his fellow Republicans to terrorists[2], calling them “lemmings with suicide vests”:

“They have to be more than just a lemming. Because jumping to your death is not enough. …

The real test came on Oct. 16[3], when the House voted on a clean continuing resolution, which reopened the government without any changes to Obamacare. The delegation split almost perfectly in half.

Others in the California delegation — such as Rep. Dana Rohrabacher — continue to oppose legislation that would contain a pathway to citizenship.

Rohrabacher has been particularly vocal about this on Twitter in the last few days, tweeting, “US permits more legal immigration than all other countries combined., over a million. Quit acting like we aren’t generous” and[6] “amnesty will bring tens of millions more than the 20 million illegals already here, bidding down wages, draining gov programs.”

“We can’t afford any more delays,” said Rep. Denham. “We are a nation of immigrants, but today, our broken system has failed to secure the border, enforce our current laws and help us to attract the best and brightest who want to come and contribute to the greatness of America.

“I support an earned path to citizenship to allow those who want to become citizens to demonstrate a commitment to our country, learn English, pay fines and back taxes and pass background checks. This is a common-sense solution to our broken system. I also support a faster pathway for the children who were brought here by their parents through no fault of their own, who have been raised in America and educated in our schools and have no other country to call home.

The difference between the two on immigration is distinct, tonally and intellectually.

Generally, California Republicans agree on major subjects like taxes, size of government, gun rights, abortion restrictions and other issues. But division on immigration and how to handle budget negotiations are very real.

The differences, however, are a matter of simple demographics. Denham’s district is roughly 40 percent Hispanic; Valadao’s is similar. Rohrabacher, who has half as many Hispanics in his district, has much less of a political need to shift his tone on immigration reform.

So long as the districts they represent remain different, different congressmen will be different too. It’s as simple as that.