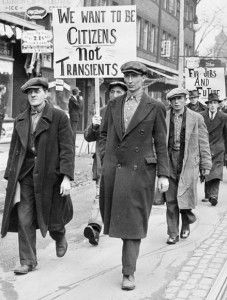 [1]This kind of puts a kink in Gov. Jerry Brown’s insistence that “California is back.” According to a new study by the U.S. Census Bureau, when housing is factored in, California has the nation’s highest poverty rate, at 23.8 percent[2]. It’s higher than Mississippi, Alabama, West Virgina and other states we think of as poor.

Brown’s response — he really said this[3] — “People come here from all over in the world, close by from Mexico and Central America[4] and farther out from Asia and the Middle East.[5] So, California beckons, and people come. And then, of course, a lot of people who arrive are not that skilled, and they take lower paying jobs. And that reflects itself in the economic distribution…. So, yeah, it’s there, but it’s really the flip side of California’s incredible attractiveness and prosperity.”

So we’re poor because we’re rich.

But the poor also are attracted to Texas — bad weather and all — which has a poverty rate of 16.4 percent. That’s because it has two things California doesn’t: cheap housing and plentiful jobs. So in the Lone Star State the poor have a chance, if they work hard, to lift themselves up.

Here’s why, despite the gleaming billionaire future promised by Silicon Valley, poverty is so high in California:

1. High housing costs. This stems from extreme restrictions on new construction by the California Coastal Commission and innumerable regulations of every kind. The median price of a home now is more than $1 million in Silicon Valley and San Francisco; and more than $650,000 in Orange County.

3. Preposterous regulations, such as AB 32, the Global Warming Solutions Act of 2006[6]. The regulations hamstring manufacturing, whose jobs used to be the main way the poor lifted themselves up into the middle class.

4. Schools near the bottom on national testing. California schools recently were dumbed down[7] by the adoption of the federal Common Core curriculum. The ultra-powerful teachers’ unions buck any reforms, denying way too many kids the skills necessary to compete in a high-tech economy.

I don’t see any of those things changing. If you’re poor, you get a lot of benefits. If you’re rich, you can enjoy California as the perfect playground. If you’re middle-class, you have trouble paying the housing and tax bills, and every day are at risk of dropping into poverty — as you check the price of renting a U-Haul.