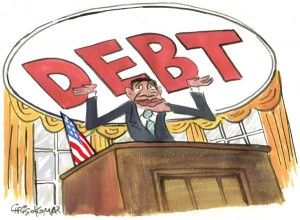 [1]In the past I’ve written here [2]about the U.S. federal budget not being $17 trillion in the red, but more than $200 trillion (with a “t”). The calculations come not from some right-wing activist, but from Prof. Laurence Kotlikoff, a professor of economics at Boston University and a research associate at the  National Bureau of Economic Research.

This is important for California because something around half of the state budget — the total amount — comes from the federal government. When the feds begin cutting back spending sharply, as inevitably they will, then California will see sharp cuts in Medicaid/Medical, AFDC, SNAP/food stamps (more than the recent cuts), education/No Child Left Behind/Race to the Top, etc.

Kotlikoff recently was interviewed by Financial Sense Newshou[3]r. And Bob Wenzel provides a transcrip[4]t of some of it:

Officially, the federal deficit is $17 trillion. Where is it really more than $205 trillion?

The liabilities the government owes are mostly off the books. We have a true debt picture which is about $205 trillion. This is recording all the future obligations the government has, whether they are official obligations or not, such as paying for your social security benefits, mine, or your mother’s Medicare benefits, defense spending, etc. All of these things are really obligations that aren’t recorded on the books as debt, whereas paying off future principal and interest payments on Treasury bills and bonds are recorded. So, anyway, if you take the value of all of those commitments and subtract all the taxes coming to pay those commitments, the difference is what’s called the fiscal gap; and that fiscal gap in the U.S. is now $205 trillion. So, the true debt is $205 trillion; the official debt is only $17 trillion. So, most of the problems we’re facing, most of the debt we have, the vast majority of it is off the books and Congress has done bookkeeping to make sure the public doesn’t see it.

Why is that not well known?

The Clinton administration—we put out the fiscal gap studies for a couple of years on the President’s budget. The Clinton administration then censored it. The guys who’s now head of the National Economic Council, the Chief Economic Advisor to President Obama, was the one who did the censorship back in 1994. President Bush’s Treasury Secretary O’Neil wanted us to do a fiscal gap accounting for the President’s budget in 2003 and he was fired in December 7, 2002, and that study was censored two days after he was fired. So, this is not accidental. This is more or less a conspiracy to hide the truth to keep ourselves and our kids in the dark about what the politicians are really doing, which is trying to garner the votes of older people and then get reelected and leave a bigger mess for our kids to handle.

But the bills are starting to come due as the Baby Boomers keep retiring.