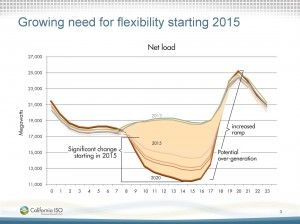 [2]In Part 1 [3]of this series, I reported on how California is launching a regional “energy imbalancing market” to reduce the spike in the price of electricity each day during sunset hours under the state’s new green-energy power grid. This is called the “duck chart problem” in California, as the time profile of energy use looks like a duck when solar power fades out at sunset each day and conventional energy has to ramp up to supply the grid before wind power ramps up. (See chart at right. Click to enlarge.)

First, it is a speculative assumption that all generating sources in the Western U.S. would commit 100 percent of their hydropower and other clean power sources to participation in California’s imbalance market.  One of the major reasons cited by Argonne is the “market price risk” of reserving power for a time window of 4:30 to 6:30 pm each day that runs the risk of having to bid at prices that are under the cost to produce the power.

Moreover, only about 10 percent of the blocks of electricity offered for market bids by the Southwest Power Administration end up as power actually dispatched.  Grid congestion during sunset hours is another problem not addressed in California’s regional balancing market.

Limitations on use of federal hydropower[5] due to environmental lawsuits to protect fish also limit the capability to respond to rebalancing market bids.

So it’s no wonder the official government studies of imbalancing markets are “benefit-only” studies, not cost-benefit studies (see here[6], here[7], and here[8]). In other words, the government isn’t sure what the ultimate costs will be, something that any normal private business would do as a matter of course.

According to a report prepared for the American Public Power Association and the National Rural Electric Cooperative Association, cost  savings from the imbalancing markets are estimated to be from $146 million to $294 million per year.  [9]However, this only reflects 0.72 percent to 1.36 percent of total regional electric production costs. Worse, if both the Western Area Power Administration and the Bonneville Power Administration, which run federal hydroelectric power plants, do not join California’s imbalance market, the cost savings would be even punier.

The American Public Power Association[13] says the costs of an imbalancing market could run $1.25 billion, or $3.50 per megawatt hour, over the first 10 years of operation.  More worrisome for the APPA is that an imbalancing market would morph into a redundant grid-regulating bureaucracy called a Regional Transmission Organization[14].

Because an imbalancing market would operate regionally over the entire Western U.S., there would be what is called cost shifting[15].  This is where electric generation paid for by customers in one region (likely Utah, Arizona, Oregon, Wyoming, or Idaho) would be dispatched to benefit other customers  (in San Francisco or Los Angeles).  California would duck its energy price-spike during sunset hours of each day by an indirect subsidy of cheaper, imported hydropower portrayed as a rebalancing market.

As Kenneth Rose stated in his Critique of the National Renewable Energy Laboratory Analysis of the Proposed Energy Imbalance Market in the Western Interconnection[16]:

If It Walks and Quacks Like a Duck, It’s a Federal Subsidy

California’s “energy imbalancing market” is a plan mainly to use cheap federal hydropower from the Bonneville and Western power administrations — and Warren Buffet’s Pacificorp’s portfolio of dams, power plants, and wind farms — to bail out California’s green-power grid from a design defect in its green-power plan.  Ironically, green power would make California more dependent on imported power at critical peak ramping times.

California’s green-power mandate already needs a partial bailout of cheap federal hydropower during the critical sunset hours of each day. Probably most troublesome of all is that there is no apparent contingency plan if California’s plan doesn’t turn out all “ducky.”