While the president has indirectly admitted that “if you like your health plan, you can keep it” isn’t true, his administration keeps up the deceit when it comes to other aspects of the Affordable Care Act. White House spokesman Jay Carney, for example, has repeatedly said this week that the only people losing coverage had bad policies. The left-wing message machine’s shorthand term is “crappy insurance[1].” Barack Obama’s locution: “cut-rate plans that don’t offer real financial protection in the event of a serious illness or an accident.”

The pathetic excessive paternalism of this judgment is bad enough; you American idiots don’t know what’s good for you, etc. But objectively speaking, it’s just not true that the people with cancelled plans all had “bad” policies with high deductibles and little coverage. The 160,000 policies that Kaiser Permanente cancelled in California reflected a big range of coverage, including at least 30,000 policies that could never be depicted as “crappy” or “cut-rate.”

ProPublica offers a telling example[2] of such a policy in a story headlined “Loyal Obama Supporters, Canceled by Obamacare”:

“San Francisco architect Lee Hammack says he and his wife, JoEllen Brothers, are cradle Democrats.’ They have donated to the liberal group Organizing for America and worked the phone banks a year ago for President Obama’s re-election.

“Since 1995, Hammack and Brothers have received their health coverage from Kaiser Permanente, where Brothers worked until 2009 as a dietitian and diabetes educator. ‘We’ve both been in very good health all of our lives – exercise, don’t smoke, drink lightly, healthy weight, no health issues, and so on,’ Hammack told me.

“The couple — Lee, 60, and JoEllen, 59 — have been paying $550 a month for their health coverage — a plan that offers solid coverage, not one of the skimpy plans Obama has criticized. But recently, Kaiser informed them the plan would be canceled at the end of the year because it did not meet the requirements of the Affordable Care Act. The couple would need to find another one. The cost would be around double what they pay now, but the benefits would be worse.” 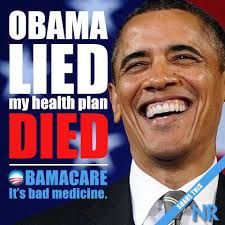 ProPublica reporter Charles Ornstein, in a bit of unusual but still telling candor, admits he was inclined to doubt the truth of Obamacare horror stories. But he found the Hammacks’ tale credible.

“I tried to find flaws in what Hammack told me. I couldn’t find any.

“—The couple’s existing Kaiser plan was a good one[3].

“—Their new options were indeed more expensive, and the benefits didn’t seem any better[4].

“—They do not qualify for premium subsidies because they make more than four times the federal poverty level, though Hammack says not by much. …

Ornstein notes the basics of the Kaiser plan being cancelled vs. the plan Kaiser recommended in its place:

“It carried a $4,000 deductible per person, a $40 copay for doctor visits, a $150 emergency room visit fee and 30 percent coinsurance for hospital stays after the deductible. The out-of-pocket maximum was $5,600.” …

“And for that higher amount, what would they get[5]? A higher deductible ($4,500), a higher out-of-pocket maximum ($6,350), higher hospital costs (40 percent of the cost) and possibly higher costs for doctor visits and drugs.”

No, Covered California did not offer relief

At this point in stories of this type, defenders of Obamacare will always say, “But under the ACA, they have options. What about the other options?” And if reporters are worth a damn, they will look at the other options — and almost always find out what Ornstein did: Other options are very costly, too.

“When they shopped around and looked for a different plan on California’s new health insurance marketplace, Covered California[6], the cheapest one was $975, with hefty deductibles and copays.”