California Attorney General Kamala Harris isn’t exactly alone in abusing her powers as the state’s top law-enforcement official when it comes to ballot measures. When they had the post, Gov. Jerry Brown[1] and Treasurer Bill Lockyer reveled[2] in using the AG’s powers to punish measures they or their patrons didn’t like and to help measures that they or their patrons liked.

But there’s something particularly odious about how Harris has put her finger on the scale of justice with the ballot language for a trial-lawyer measure to up the amount they can wring out of doctors through medical-malpractice lawsuits. Dan Walters had the details[3] earlier this week:

“This is the official ‘title and summary’ of a proposed 2014 ballot measure, as prepared by Attorney General Kamala Harris’ office:

“‘Drug and Alcohol Testing of Doctors. Medical Negligence Lawsuits. Initiative Statute. Requires drug and alcohol testing of doctors and reporting of positive test to the California Medical Board. Requires Board to suspend doctor pending investigation of positive test and take disciplinary action if doctor was impaired while on duty. Requires doctors to report any other doctor suspected of drug or alcohol impairment or medical negligence. Requires health care practitioners to consult state prescription drug history database before prescribing certain controlled substances. Increases $250,000 cap on pain and suffering damages in medical negligence lawsuits to account for inflation.’

“A voter who is approached to sign petitions for this measure would naturally assume that its primary thrust is eliminating drug-addled doctors, and if it qualifies for the ballot, one can be certain millions of dollars will be spent on its behalf to drive home that seemingly lofty goal.

“In fact, however, its real aim is reflected very briefly in the final sentence — to modify the state’s 38-year-old cap on ‘pain and suffering’ damages in medical malpractice cases.'” 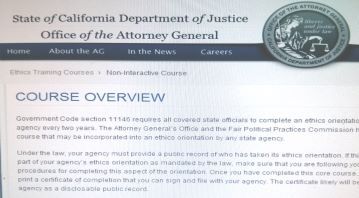 Now there is a very strong chance that a judge will throw out Harris’ ridiculously slanted ballot language. But that doesn’t hide the corrupt intent of our attorney general: to benefit her fellow lawyers, by legal hook or crock.

Here’s what’s funny: Googling “California state government ethics” turns up the fact that the AG’s office is responsible for administering an ethics test[4] to state officials!

“Government Code section 11146 requires all covered state officials to complete an ethics orientation conducted by their agency every two years. The Attorney General’s Office and the Fair Political Practices Commission have devised this core course that may be incorporated into an ethics orientation by any state agency.

But has Harris taken the test? If so and she passed, she’s since forgotten what it means to be ethical.

This is one more example of a point I made earlier this week[5] when writing about the Bay Area Rapid Transit system: Corrupt, dishonest behavior that would lead to civil or criminal sanction in the private sector is taken for granted in the public sector.

Were she chief counsel for a corporation that behaved this horribly, Kamala Harris would be pilloried, and correctly so. In Sacramento, however, she faces little blowback — and is probably chortling at the brazen way she has figured out how to reward her friends[6] in the trial-lawyer community.