Organized and run by Privacy for All Students[1], a potential  referendum, if approved by California voters, would repeal AB 1266[2], commonly known as the transgender school bathroom bill.

By Assemblyman Tom Ammiano, D-San Francisco, AB 1266’s language says “that a pupil be permitted to participate in sex-segregated school programs and activities, including athletic teams and competitions, and use facilities consistent with his or her gender identity, irrespective of the gender listed on the pupil’s records.”

The bill was co-authored by state Sen. Mark Leno, D-San Francisco, and signed into law by Gov. Jerry Brown.

Leno explained the need for the bill to AP[4]:

“There should be certainty that every kid has the chance to go to school and be treated equally and fairly. We know that these particular students suffer much abuse and bullying and denigration. We can’t change that overnight, but what we can do is make sure that the rules are such that they get a fair shake.”

And AP reported on a statement emailed by the Transgender Law Center. In it, 16-year-old transgender boy Ashton Lee said:

“I just want to be treated the same as all the other boys, but my school forces me to take P.E. in a class of all girls and live as someone I’m not. I can’t learn and succeed when every day in that class leaves me feeling isolated and alone.”

If the 620,000 signatures just turned for the initiative qualify the referendum for the ballot, it will be voted on during the next general election in Nov. 2014.

“This is a win for the people,” said Karen England, Executive Director of the Capitol Resource Institute, a conservative think tank, and the co-chairwoman of the Privacy for All Students referendum.

Privacy for All Students[5] is a coalition of parents, students, nonprofit and faith groups who launched the referendum effort to give voters the right to decide whether to accept AB 1266[2], which would inevitably transform intimate school facilities such as showers, bathrooms and locker rooms, according to England.

The law would allow transgender students to self-identify as transgender, in order to use school bathrooms and try out for sports teams of their chosen gender, even if that differs from what’s stated on their birth certificates.

Around the state in 80 days 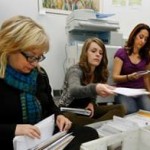 “We had under 80 days to do this,” England said. “This is a new way of doing things, which may be how our founding fathers intended.”

England said she had so much support for the signature gathering. “We had a fellow in Reedly, CA who collected 2,000 signatures,” she said. “We had people who drove for hours to deliver only a few signatures, and hundreds of signatures. The Calvary Chapel church in Chino Hills delivered 46,000 signatures! Sadly, it’s clear, most politicians don’t care. It does take the people.”

England said a change of the magnitude of AB 1266 would cause chaos and confusion in the state’s public schools.

England said there was also huge support coming from Chinese churches in the San Francisco Bay area. “People drove more than five hours round trip to deliver their collected signatures,” she said.

“We’re not going to stand by and let 99.7 percent of our students lose their privacy and free speech rights just because 0.3 percent of the population are gender-confused,” said Brad Dacus, president of Pacific Justice Institute[7].

Specializing in the defense of religious freedom, parental rights, and other civil liberties, the non-profit Pacific Justice Institute[7] works without charge, to provide its clients.

“LGBT activists are sacrificing the safety and sanity of children in our schools to push an extreme political agenda,” Dacus said. “This battle is no longer confined to California or Colorado, where we have another case; it is spreading to every part of the nation. It is crucial that we act now to prevent a crippling blow to our constitutional freedoms.”

If allowed go into effect, AB 1266[2] would deprive non-transgender students in public schools of their privacy rights and affect girls’ rights to participate in sports, Dacus explained. “Case law firmly establishes that we as Americans have the right to privacy, under the Constitution,” said Dacus. “This case is irrefutably self-evident.”

Privacy is especially sensitive to students during the pre-teen and teenage years. “A 12- or 14-year-old girl should have a right to change clothes and shower in a locker room, without having a 14-year old boy showering and changing his clothes next to her,” Dacus said. “Outside of rape, this is the greatest violation of individual privacy imaginable. Yet it is exactly what was legislated and mandated to occur, under the pretext of a boy who, in his mind, thinks he’s a girl.”

“The Legislature could have passed something compassionate and supportive for gender-confused children, to help resolve the underlying issues for dysphoria,” Dacus said. “Instead, this law ties the hands of parents, school officials, and psychologists, in how gender confusion is addressed. It’s anti-transgender.”

NBC Bay Area profiled[8] one teen who backs the bill:

“Kane Atticus Tajnai lived as Kathryn Amanda for 16 years before coming out to his family as a transgender teen.

“Kane, now a senior at Gunderson High School in San Jose, said he never felt completely comfortable — not just with being identified as a girl, but about labels in general. For Kane, the labels on the bathroom doors at school were some of the hardest to face. He wanted to go into the boys’ room, but felt obligated to go into the girls’ bathroom.

“As for Kane, changing in the boys’ locker room and using the boys’ bathroom at school has not resulted in any problems.

“He believes this new law has the power to save lives. He remembers his worst nights, feeling desperate and alone, and though he sometimes still has emotional struggles, he feels much freer — a feeling he hopes others in his shoes can also experience. With that, he had a question for the opponents of AB 1266.

“’Don’t I deserve the same safety at school and same comfort level at school, that all the other students do?’ he said.”

Parents mad at the mainstream media

Karen England said hundreds of the Privacy for All Students[5] volunteers told her they were angry with the mainstream media for not highlighting the seriousness of Ammiano’s bill. “People from all over the state said they heard little or nothing about AB 1266[2],” England said. “They were outraged when they realized the law had passed, and asked me, ‘what was Jerry Brown thinking?’ This referendum protects all students, including girls who don’t want to go the bathroom with a boy in the next bathroom stall.”

“A referendum is hard, and it should be,” England added. “This has cost $500,000, of which $300,000 has gone to paid petition gatherers. The rest is a massive grass roots organization.” In recent years, paid petition-gathering has cost about $2 million for a statewide initiative. So the low cost of this campaign shows the grassroots effect.

“This has been a huge battle,” England said. “Democratic politicians need take note — the sleeping giant in California is going to wake up.”