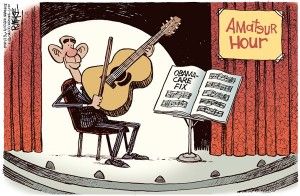 [1]Since its disastrous rollout, the bad press hasn’t stopped coming for Obamacare. First, the health insurance exchange website — which cost $600 million to create — simply didn’t work. (Three 20-year-old programmers, however, managed to fix one of the site’s worst problems on their own.[2])

Later, the focus began to shift toward rate shock. Even liberal[3] bloggers[4] have taken to the internet to complain about their premiums doubling. And most recently, the glare has turned toward President Obama and his prevarication that, “If you like your insurance, you can keep it.” The rollout thus far has been nothing short of an unmitigated political and policy disaster for Obama. (If the presidential election were held today, Gov. Mitt Romney would win, according to a recent poll.[5])

And, as with any crisis, there’s more. Today let’s take a look at how the Affordable Care Act is affecting dental care in the United States and California. First, consider this reader e-mail:

ACA is affecting more than health care. United Healthccare Dental has sent out rate notices they say are caused by ACA. A family that now pays $67.00/month in Santa Barbara County will now pay $191.35 in 2014. This is in sharp contrast to the new rate of $34.61 in Nancy Pelosi’s district, San Francisco. The new rate of $191.35 affects only San Luis Obispo, Monterey, Santa Barbara and Tulare Counties.

So, why the hike in dental rates (for some Californians)?  Under the Affordable Care Act, dental coverage is deemed “essential” — for children.  If someone has a child under 18, they must have dental care. It can come in two forms, according to News Leader.

The dental rate hike has occurred for the same reason that so many health care plans have seen their premiums increase. More people — and some of them higher risk — are now entering insurance pools. And on top of that, each plan has more features, regardless of whether or not a policyholder wants or needs those additional pieces of coverage.

But the dental health care component isn’t necessarily all it’s cracked up to be, according to a report from Kaiser Health News[6]:

Under the ACA, states were supposed to select existing insurance policies in their states to serve as benchmarks for the plans they include on their exchanges. Because most medical plans do not include dental coverage, some of those benchmark plans don’t either.

But because the ACA requires pediatric dental care, states either will graft dental coverage into the medical plans on the exchanges or offer customers the opportunity to buy separate stand-alone dental policies.

There’s a hitch, advocates say: States that opt to offer stand-alone dental policies do not have to require parents to purchase them. While some states, such as Washington and Nevada, are making it a requirement, others are not, according to Colin Reusch, a senior policy analyst with the Children’s Dental Health Project.  So in effect, although pediatric dental benefits are “essential,” they will not be mandatory in all states.

Whether or not the states that opt out of the mandatory requirement will experience much lower rates remains to be seen.