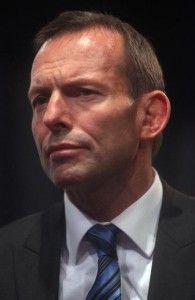 [1]Last month West Coast governors, led by Gov. Jerry Brown, agreed to impose carbon taxes on their people. And California has had a carbon trading system[2] for a year now.

But new Australian Prime Minister Tony Abbott, in an interview with the Washington Post[3], blew the lid off such schemes:

During your campaign you called for a repeal of the carbon tax imposed by the Labor Party. Why are you against this tax?

The carbon tax is bad for the economy[4] and it doesn’t do any good for the environment. Despite a carbon tax of $37 a ton by 2020, Australia’s domestic emissions were going up, not down. The carbon tax was basically socialism masquerading as environmentalism, and that’s why it’s going to get abolished.

It will be abolished this year?

As soon as possible. If the Labor Party wants to give the people of Australia a Christmas present, they will vote to abolish the carbon tax. It was damaging the economy without helping the environment. It was a stupid tax. A misconceived tax.

That’s right: “socialism masquerading as environmentalism.” Unfortunately, in California it’s likely to be around a lot longer than Down Under.

You said in your victory speech that Australia is once again open for business. Does that mean you believe that the previous government was unfriendly to businesses?

I said Australia is under new management and is once again open for business. The previous government would often say the right thing but it would invariably do the wrong thing when it came to business. There was an explosion in red tape and green tape. There was a whole thicket of new restrictions in the labor market. There were big new taxes. It was a government which thought that there was no problem that more public servants, higher taxes and further regulation couldn’t fix.

So you’re reversing that?

We will do our damnedest to shrink the public service and have a bonfire of red tape and unnecessary taxes.

So how will you get needed revenue?

If you get taxes and regulations down, you will get creativity up and ultimately that means more growth and more revenues. The best way to get growth is to have a smaller, more effective government. We are doing our best to get government spending down.

Likewise, that’s the opposite of what California is doing. Here we have higher taxes, and much more red tape and green tape. But here, there’s no alternative. Our Labor Party, the Democratic Party, is so dominant it is unlikely ever to be removed from office in the coming decades. There’s no California Tony Abbott.

At least Bud Abbott is ours.