What is the CA Agricultural Labor Relations Board? 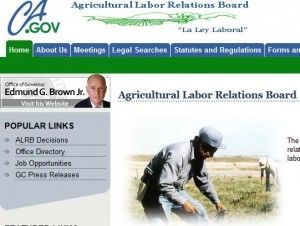 California government includes many boards and commissions with members appointed by the governor. Most people never get to see who these decision makers are, despite the far-reaching effects of their decisions on the people of the state.

* Chairman Roger Mahony[5], at the time an auxiliary Catholic bishop for Fresno and the future cardinal and archbishop of Los Angeles. He had been involved in farm workers’ issues for many years.

According to the new 2013 book, “Trailblazer: A Biography of Jerry Brown[10],” by Chuck McFadden:

“Instead, Mahony became a lightning rod. Brown later remarked that he ‘didn’t know [Mahony] that well,’ and didn’t anticipate the bishop to be ‘as much a polarizing force as he’ was. Mahony’s ‘image in the farming community was more pro-UFW’ than Brown realized, but regardless, the governor ‘felt it was important to have a board that all sides would have some confidence in, but particularly the farm workers’….

“Mahony may have harbored a personal preference for the farmworkers, but CALRB’s records indicate that the bishop maintained his professionalism.”

An ALRB study, “Setting the Record Straight,” found that the five board members produced dissenting opinions in just 7 percent of cases.

In 1976, Mahony faced a major funding crisis for the ALRB and had to lay off workers and faced numerous other problems, as described in Prouty’s book.

The subsequent decades have seen a reduction in the ALRB’s reason for existence, as farm unionization has declined. According[12] to a 2000 study by Phillip Martin of University of California, Davis, “Labor Relations in California Agriculture: 1975-2000[13],” the ALRA  was passed “to ensure peace in the agricultural fields by guaranteeing justice for all agricultural workers and stability in labor relations.” Instead, “what has happened over the past 25 years [1975-2000]: Union activities, measured by elections or unfair labor practice charges filed, peaked in 1975-76, and have since fallen over 90 percent.”

And at the time, Brown ally Rose Bird [14]was his secretary of agriculture and a major author of the ALRA. She now is remembered as the first and only chief justice of the California Supreme Court to be removed from office by voters, along with associate justices Cruz Reynoso and Joseph Grodin. The latter, of course, had been one of Brown’s first appointments to the ALRB.

According to the board’s website[15], “The agency’s authority is divided between a Board composed of five members and a General Counsel, all of whom are appointed by the Governor and subject to confirmation by the Senate.”

With two vacancies, the board currently has three members[16]:

* Chairwoman Genevieve A. Shiroma, who has served on the board since 1999, was appointed by Gov. Gray Davis. She was reappointed by Brown in 2011.

* Cathryn Rivera-Hernandez was appointed by Davis in 2002 and re-appointed by Brown in 2013.

The general counsel, Sylvia Torres-Guillén, was appointed by Brown in 2011.

Executive Secretary J. Antonio Barbosa, who runs day-to-day operations, is appointed by the board and has held his position since 1992.

This series will report on the backgrounds of the board members and officials. Part 2 of the series will be on ALRB Chairwoman Genevieve A. Shiroma.