Why is gas so expensive in California? 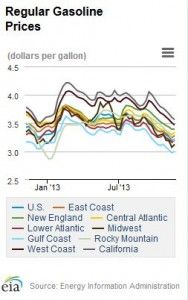 [1]When people talk about gasoline, it’s usually because prices have dropped — or skyrocketed. But with prices remaining between $3.90 and $4.10 per gallon in California for most of 2013, there hasn’t been much noise about gas prices. (As of Monday[2], the average price for a gallon of regular stood at just $3.56. It typically drops in the fall.) However, there is an interesting trend underlying the generally stable gas prices; and it’s one that might upset some consumers in the Golden State.

Typically, a gallon of regular gasoline costs between 30 and 35 cents more in California than it does in other parts of the country. However, throughout the summer and fall, that difference per gallon has reached up to 50 cents. So why exactly has the price of gas up more in California?

To start, California uses a different formula for its fuel[3]. Environmental regulations require that the gas here must burn cleaner than in other states. In fact, California has some of the strictest pollution standards in the nation. The cleaner-burning gas is more expensive to produce, so California sees an increase in prices of about 10 to 15 cents per gallon.

On top of the more expensive fuel come California’s gasoline taxes — the highest in the country. (New York was ahead last year, but California caught back up.) Drivers in the state pay around 72 cents per gallon of local, state and federal gasoline taxes. Other states have less than half of that burden.

Those factors — taxes and environmental regulations — have always affected gas prices, though. So why is the gap growing?

This summer, several developments helped widen the gap between gas prices in California and the rest of the country.

The state’s excise tax on gasoline increased 3.5 cents per gallon on July 1, as part of an annual adjustment required by state law.

Refineries elsewhere in the country were churning out copious amounts of gasoline, more than drivers needed. And in some regions, refineries were able to take advantage of the surge in U.S. oil production triggered by hydraulic fracturing.

Although oil is priced on the global market, the U.S. surge has happened so quickly that the country lacks the pipelines needed to move all that oil to the coasts. So refiners in some places, such as the Midwest or the Rocky Mountains, have been able to buy “stranded” oil at a discount.

For example, Rocky Mountain refineries paid $96.63 per barrel of oil in August, according to the U.S. Energy Information Administration. During the same month, California refineries paid $108.05. With no oil pipelines connecting California to other states, refineries here often pay more for petroleum than do their counterparts elsewhere. The difference rises and falls over time.

Finally, several California refineries experienced technical problems this year that trimmed their production, said Gordon Schremp, senior analyst with the California Energy Commission. But the state’s current gasoline inventories are normal for this time of year, he said.

The good news is that gas prices will probably continue to slump for the remainder of the year. The bad news is that they’ll slump back down to what is considered inexpensive only in California.