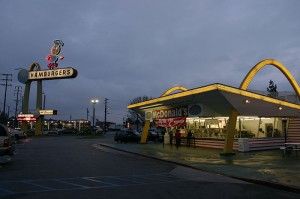 [1]The California Legislature this year boosted California’s $8 per hour minimum wage to $9 in July 2014 and $10 in January 2016. But advocates for, and beneficiaries of, that 25 percent wage hike are not content. Pressure is building to increase the minimum wage to $15 per hour.

Nationwide strikes[2] by fast-food workers were held in August. This month, the workers argued their case before a joint legislative committee hearing on the societal impact of fast-food wages.

“They pay us non-livable wages with no healthcare,” Oakland KFC worker Shonda Roberts told the committee on Nov. 13. “We can’t take care of our basic needs. We are not lazy. It’s the fast-food corporations that get away with murder. I want to be able to take care of myself without having to depend on government programs. I’m not getting paid enough to live, and have to rely on taxpayer services. Force the fast-food companies to pay us enough to survive without public assistance.”

Simone Sonnier Jang has two children and works at a McDonald’s in Los Angeles. She receives $1,400 per month from the taxpayers for childcare along with Medi-Cal, Section 8 housing and assistance from Cal Works. She makes $8 per hour and averages 20 hours a week.

“It’s tough to support a family with those hours,” she said. “Ask fast food to give us 40 hours a week and a decent wage to raise my kids with, so I can make ends meet on my own without help from the state. I would like that.”

Ilda Amador has two kids, is pregnant and works 15-27 hours per week at a fast-food restaurant. She said, “I don’t think it’s right that I work so hard and have to go to public assistance. I should be able to provide for my family. But $8.25 is not cutting it for my family. They won’t give us a living wage.”

None of the women mentioned receiving support from the father or fathers of their children, and none was asked about it.

The fast-food industry is taking advantage of taxpayers by paying their workers so little that they are forced to rely on government assistance, argued Ken Jacobs, chairman of the U.C. Berkeley Center for Labor Research and Education[3]. He’s also co-author of a recent study, “Fast Food, Poverty Wages: The Public Cost of Low-Wage Jobs in the Fast Food Industry.”[4]

“It documents the high public cost of low-wage work in America,” said Jacobs. “When jobs pay too little for families to get by and meet their needs on their own, then they must rely on publicly funded programs to make ends meet. A staggering 52 percent of families in fast-food jobs rely on one or more public assistance programs. It’s the rule, not the exception for fast-food workers.”

The study focused on fast-food employees working at least 11 hours a week, 27 weeks a year. Their median wage is $8.69 an hour. The study looked at their use of four assistance programs: the earned income tax credit, health insurance/Medicaid, food stamps and temporary aid for needy families.

“There’s a common misperception about fast-food workers that they are teenagers living at home with their parents,” said Jacobs. “Sixty-eight percent are main wage earners in their family. More of the workers are parents raising a child than are teenagers 18 or under living with their parents. People working in fast-food jobs are, however, much more likely to live in or near poverty. One in five families with a member holding a fast-food job has income below the poverty line.”

Jacobs said that California’s 25 percent increase in the minimum wage over the next two years will help make a difference. “Though not enough to fully address the scope of the problem,” he added.

In addition to paying their workers more, the fast-food industry should contribute to Medicaid and allow employees to unionize and collectively bargain, he said.

“It’s not a question of should we have public programs or higher wages,” Jacobs said. “They both work best when they are combined. So if we are thinking about the best way to address program cost, it’s to raise labor standards so that fewer families need to rely on public assistance. Not to cut the programs themselves. It’s not that public programs are too generous, but that wages are too low.”

The problem is that the profit margin in the restaurant industry is slim, just 3-5 percent, according to Jot Condie, president and CEO of the California Restaurant Association[5].

“In other words, for every dollar that comes into a restaurant, there’s three pennies to a nickel left over,” he said. “The other 95 to 97 percent covers labor cost, goods, food and operational expenses in that order. That leaves little room to react to the many external variables that exist in our industry: rapidly changing market trends, lawsuits — the kind that make California so famous — unforeseen spikes in commodities, equipment and building repairs, minimum wage increase, to name a few.”

Many restaurants are mom-and-pops — 55 percent of the association’s 22,000 members have only one location. One out of four restaurants don’t last a year; the average lifetime is 4-9 years. They will likely have to cut into their profits to absorb the coming minimum wage increases, according to Condie.

“It’s gone up every three to five years,” he said. “We grumble sometimes more than others. As an industry we will deal with it. We always do. The alternatives are either you increase prices, you reduce your workforce by numbers of people or cut back hours. Most will try to eat into the profit margin. They don’t want to let anyone go. It’s bad for morale. Raising prices will happen over time. A 55 cent taco, those years are gone.”

Employee hours have been cut and prices have increased at restaurants in San Jose since that city increased its minimum wage to $10 a year ago, he said, based on anecdotal evidence.

None of the fast-food workers speaking at the hearing was asked whether they were concerned about decreased hours or being laid off as a result of further minimum wage increases.

But Sen. Holly Mitchell[6], D-Los Angeles, asked them what a reasonable compromise might be.

“If we push the envelope and pay you what would be a livable wage in Los Angeles or San Francisco, they will have to pass on the cost, and the burgers will be 12 bucks a piece,” Mitchell said. “Who could afford it? We don’t want the industry to go out of business. What is a reliable, happy medium? If you were a McDonald’s franchise owner having to make payroll, what would you do?”

Roberts responded that the cost of increased wages could be offset by reducing the amount spent on advertising and by modestly increasing prices.

“They only have to raise a Big Mac 21 cents to pay every one of their workers nationwide $15 an hour,” she said. “Twenty-one cents. You distribute that through your whole menu, our customers would not know.”

But it’s not always easy for small businesses to pass on cost increases, according to Michael Saltsman, research director for the Employment Policies Institute[7].

“Instead it forces adjustments that adversely affect employees that policy makers are trying to help,” he said. “That’s the conclusion of not a handful of studies, but actually 85 percent of the credible academic studies on this issue over the last 20 years point to that conclusion.”

Saltsman told the committee that the Labor Center report is biased because it’s funded by labor unions, which would benefit from a higher wage floor. The study is skewed because it ignores fast-food employees who worked fewer than six months, and it’s conclusions are overblown in any case, he said:

“The Labor Center report argues that the fast-food industry makes a disproportionate — that’s their word — contribution to the safety-net programs. Specifically, they estimate the industry costs taxpayers nearly $7 billion a year. That’s a big number and it’s intended to shock readers. But it represents just 1.8 percent of total safety net spending. According to the Census Bureau, fast-food workers are about 3.3 percent of the private-sector work force. In other words, fast-food employees represent a quote ‘disproportionate share of safety net spending’ only in the sense that the government is actually spending less on them relative to their share of the workforce.

“In truth, the most shocking thing about this report is the lack of shocking information about fast-food employees and their safety net participation rates. For instance, the public cost for fast-food workers and their families represented only 1.9 percent of total food-stamp spending. And just nine-tenths of 1 percent of temporary assistance to needy families spending.

“We have to find a balancing point,” he said. “We want the jobs to continue to be available. We don’t want California businesses to go out of business. But there’s the reality of the reliance of fast-food businesses on government to support their workforce. A distinction has to be made between large corporations and individual franchises; that has to be included in the calculus.”

“In California, over $700 million was spent on public assistance for fast-food workers in the years 2007-11 alone,” he said. “I would argue that this money could be better spent, and the taxpayers shouldn’t have to subsidize one industry. By the way an industry that happens to be rebuilding at a much higher rate than the 98 percent of society that isn’t rebounding at the same level. Our job is to enhance the quality of life for all Californians.”

But the quality of life of fast-food workers might actually deteriorate if Hernandez, et al., get their way, warned Assemblyman Mike Morrell[10], R-Rancho Cucamonga.

“I would like to ask us to consider: Would our workers need more public assistance or less if they didn’t have these jobs?” Morrell asked. “Working in the fast-food industry doesn’t increase the use of public assistance services. But not having a job does. The fast-food industry currently employs 3.9 million Americans. The workers employed in this industry have an opportunity to develop important skills and attributes that are valuable to employers.”

Artificially inflating wages will cause businesses to replace workers with automation, such as the increasing use of self-checkout registers, he said. He noted that many businesses are working on dangerously low profit margins — Wendy’s is 0.3 percent.

“We need to consider this in light of the fact that [increasing the minimum wage] could run maybe more jobs out of our state. If we really want to help workers in this industry, we should focus on the problem. And do something to provide them with an opportunity to obtain better paying jobs that I think all of us here really want at the end of the day. And that’s developing better work skills.

“Employing workers in the fast-food industry doesn’t cost the public anything. Taxpayers don’t put out a single cent more because these individuals are working at entry-level jobs that teenagers can handle, usually as a first job. So I say let’s encourage our job creators and not make it harder on them. And work together to bring business back to California as a business friendly state instead of driving them away. I think we need to reform our punitive laws and do everything we can to make California business friendly.”

The hearing was informational only. No votes were taken.