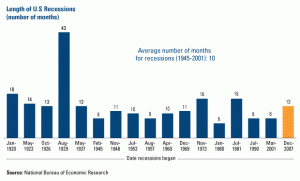 [1]There is good news and bad news in the impartial California Legislative Analyst’s recent release of its “2014-2015 Budget: California’s Fiscal Outlook.”[2]

The good news, “Stunning turnaround: California has budget surpluses as far as LAO can see.”[3] That’s the San Jose Mercury News’ headline, but other news outlets featured similar optimism.  The LAO report forecasts a state budget surplus of $5.6 billion by mid-2015, with the happy days continuing for many years.

The bad news, as stated by the LAO:  an $8 billion budget reserve would be needed to weather a “hypothetical” economic recession beginning in 2016.  The LAO warns — but does not predict — that a cyclical economic recession could hit in 2016.

The history of U.S. recessions [4]since World War II shows that they strike about every five years. (Click on the above chart to expand it.) The last one hit in December 2007, already six years ago.

In the detail of the LAO’s report, there is an $8 billion shortfall in the K-12 state education budget for 2014-15. If this hole were fully plugged, it would be unlikely that California could amass an $8 billion budget surplus to survive an economic recession in 2016.  In other words, California would be right back in the hole again with its protracted history of running budget deficits.

Then there is the $4.5 billion a year that the California State Teachers’ Retirement System claimed, in Dec. 2012[5], it needs to keep its system solvent. Gov. Jerry Brown did not included it in the fiscal 2013-14 budget he signed last June. But that, too, would wipe out most of the projected surplus.

Nor does the rosy part of the LAO projection address the growing expenditures on public health care programs, as reported by David Crane[6], former economic advisor to Gov. Arnold Schwarzenegger. Increasing health care costs are not a future liability, but a current budget expenditure that is occurring because of the the implementation of Covered California, our state’s version of Obamacare[7].

Here is the mixed numerical reality forecasted by the LAO in tabular form:

The LAO forecasts a 45 percent decline in unemployment from 2013 to 2020. Yet a projected increase in interest rates by the U.S. Federal Reserve — which would boost mortgage rates — could mean slower growth.

Yahoo Finance reports the current 30-year fixed mortgage rate is about 4.32 percent.  Thus, mortgage interest rates could climb to around the 8 percent range if the Federal Funds Rate is increased by 4.0 percentage points.

The Federal Funds rate is the interest rate that the central bank charges to commercial banks.  The Federal funds rate is connected to mortgage rates. (This is explained in John F. McDonald and Houston H. Stokes’  “Monetary Policy, Mortgage Rates, and the Housing Bubble.”)

The LAO does not explain how a plausible doubling of mortgage interest rates would result in a near doubling of housing permits by 2020.

Everyone hopes that the LAO’s rosy prediction is the true one, so that at least the state could start addressing the “wall of debt.”

But the report does warn:

“Caution, therefore, is appropriate in weighing new spending both within Proposition 98[9] — as total funding for schools and community colleges would decline under this scenario — and on the non–Proposition 98 side of the budget. Absent a prudent reserve, the Legislature could well face during the next economic downturn some of the same difficult decisions that it was required to make during the past decade.”

Prop. 98 mandates that about 40 percent of general-fund revenues go to K-14 schools.

The bottom line, which was not emphasized nearly enough in media reports, is that there are no “budget surpluses as far as the LAO can see,” but somewhat better current numbers that could go negative again real fast.