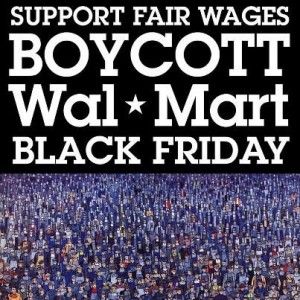 [1]Anti-Walmart protests struck across California[2] and the rest of America on Black Friday. The protesters demanded that the giant retailer pay its worker higher wages and benefits.

As part of the protests, Robert Reich is pushing a petition[3] on Facebook. The former secretary of labor in the Clinton administration currently is a professor of public policy at the University of California, Berkeley. He argues that low-skilled workers need more money to live on and that Walmart should pay its workers at least $15 an hour, nearly double the federal minimum wage of $7.75.

A year ago, 200 fast-food workers held a one-day strike at more than 20 restaurants in New York City, the first  strike in the history of the America’s fast-food industry. In August this year, 50 more fast food wage strikes took place around the country.

One argument by those favoring the higher wages, including mandated higher minimum wages, is that the higher pay would reduce the employees’ dependence on government benefits, such as food stamps.

“Why Walmart?” Reich asks on Facebook[5]. “Because it’s the largest American employer with one of the worst labor records of all employers, because it pays its workers so little they have to rely on food stamps and Medicaid to make ends meet, because it could so easily afford to lead the way upward rather than lead the race to the bottom.”

Many of the strikes are organized by the Service Employees International Union[6], one of the most powerful unions in the country, especially in California. Joining are two activist groups, Fast Food Forward[7] in New York and Fight for 15[8] in Chicago.

The SEIU is demanding[9] that fast-food chains allow workers to unionize without alleged retaliation. More union members would increase the union’s clout across the country. The SEIU’s website includes a special page[10] boosting Obamacare. It quotes SEIU President Mary Kay Henry, “The healthcare law means that working families can move forward toward more affordable, secure healthcare and better health, not backward to the status quo of skyrocketing premiums, insurance denials and unchecked profits for insurance companies.”

“In America, people who work hard should be able to afford basic necessities like groceries, rent, childcare and transportation,” Fast Food Forward says on its website. “While fast food corporations reap the benefits of record profits, workers are barely getting by — many are forced to be on public assistance despite having a job.”

“Employers like McDonalds, Whole Foods, and Sears are raking in enormous profits while workers like us, mostly adults with families, don’t get paid enough to cover basic needs like food, rent, health care and transportation,” the Fight for 15 website says.

However, according to a Bureau of Labor Statistics study for 2012[11]:

“Minimum wage workers tend to be young. Although workers under age 25 represented only about one-fifth of hourly paid workers, they made up about half of those paid the Federal minimum wage or less. Among employed teenagers paid by the hour, about 21 percent earned the minimum wage or less, compared with about 3 percent of workers age 25 and over. (See table 1[12] and table 7[13].)”

And of the three firms accused of “raking in enormous profits,” one already pays a high wage and the other two are struggling financially.

* Yahoo finance[14] reported that Whole Foods “Team Members” already average $15 an hour. It added, “The majority of them also get benefits and stock options, which many retail employees don’t.”

* AP reported[16], “Sales declines at Kmart and Sears stores led to a widened loss in the third quarter for parent company, Sears Holdings Corp. The ailing department store chain also was hurt because it had to do some heavy discounting to get shoppers to spend.”

In California, the minimum wage currently stands at $8 per hour, two bits above the federal wage. However, Gov. Jerry Brown signed a bill in September that would raise wage to $9 an hour next July 1 and to $10 on Jan. 1, 2016.

“Front-line, limited-service restaurant workers, a category that includes fast-food employees, earned a nationwide average $9.05 an hour in March, up 2.7 percent the past three years, according to the Bureau of Labor Statistics. By contrast, the pay of all private-sector non-management employees is up 5.7 percent in that period.

“Adjusting for inflation, fast-food wages have fallen 36 cents an hour since 2010, even as the industry has raked in record profits.”

Additionally, many of the fast-food chains have said they will have to cut employees’ hours [18]this year to get below the 30-hour-per-week threshold that makes them eligible for Obamacare. So even if these employees’ hourly wages go up, their weekly wages could drop from working fewer hours.

Conservative critics, such as the Heritage Foundation[19], have blamed the sluggish economy on high taxes and more regulations, such as the Obamacare mandates. The critics insist that wage growth won’t resume for such workers until Reagan-style cuts in taxes and regulations are passed.

What’s wrong with the strikes?

Nobel economics laureate Milton Friedman taught for many years about the dangerous consequences of government intervention, such as mandated prohibitions on the employment of low-skilled workers. Friedman said that, if those workers could not persuade employers to hire them at higher hourly wage rates, without acquiring more skills, lower wages were appropriate, and what the market would bear.

Advocates of raising the minimum wage claim businesses are able to absorb the costs through reduced profits, “but that’s rarely the case,” according to economist Mark Wilson, in a 2012 study[20] by the libertarian CATO Institute[21]. “Instead, businesses rationally respond to such mandates by cutting employment and making other decisions to maintain their net earnings. These behavioral responses usually offset the positive labor market results that policymakers are hoping for….

“Seventy years of empirical research generally finds that the higher the minimum wage increase is relative to the competitive wage level, the greater the loss in employment opportunities. A decision to increase the minimum wage is not cost-free; someone has to pay for it, and the research shows that low-skill youth pay for it by losing their jobs, while consumers may also pay for it with higher prices.”

Such arguments have not convinced the advocates of a higher minimum wage, such as President Obama. He recently said:

“As they struggle to put food on the table and pay their rent, minimum wage workers aren’t standing for it any more. Across the country, we have seen courageous workers go on strike to call attention to the fact that their wages cannot support their families. We stand behind these workers in their effort to raise their wages. We cannot rely on employers to pay a living wage, the federal government must intervene and that is what these workers are fighting for.”

Unlike in California, a state dominated by Democrats, Republicans control the U.S. House of Representatives. That gives the GOP veto power over any minimum-wage increase. So the battle largely will remain at the state level. Soon we will see the effects, for good or evil, of California’s higher minimum wage.