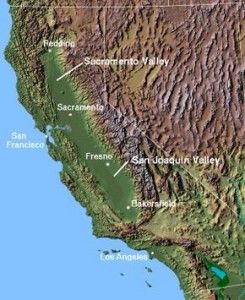 [1]More than 370,000 acres of California’s irrigated farmland disappeared from 2006-10. Officials are concerned that hundreds of thousands of additional acres could be lost in the coming years, threatening California’s leading role in feeding the nation and indeed much of the world.

“The numbers suggest some significant shifts or trends in how our agriculture lands are being used,” Lowrie told the Assembly Agriculture Committee[3] at a Nov. 6 informational hearing. “Although I have to tell you openly, I had to scratch my head a bit on what some of these statistics are telling us. Because I think they are not really typical of what we might expect to see.

“This is a surprising counterpoint: We were only able to map an increase in urbanized acres of about 44,500 acres [from 2008-10]. That’s the lowest ever recorded in any of our farmland updates.”

The next lowest two-year urbanization increase, 53,000 acres, occurred during a significant economic recession in the 1990s.

Lowrie is not sure of what became of the irrigated land that disappeared but did not get urbanized.

“How do we explain that? I don’t know that we’ve done a detailed analysis or statistical look at what we’re seeing,” he said. “Our suspicions are that land idling and long-term conversion of highly productive agriculture land to dry land grain production was the largest single reason for conversion out of irrigated uses.”

“We continue to detect significant losses of irrigated land in California, with prime farmland losses of particular interest,” said Lowrie. “In recent years it appears limited water availability is a major factor driving the loss of prime farmland, particularly in the southern San Joaquin Valley. The lack of urban development, detected in the latest cycle, tracks with the downturn in the economy experienced during that time. We would anticipate that that is a temporary phenomenon.”

An uptick in urbanization could, of course, result in further loss of farmland. That concerns committee Chairwoman Susan Eggman[4], D-Stockton.

“The preservation of farmland is important to us,” she said. “Over the years we’ve lost a lot of farmland. If we keep going at the rate we are, by 2050 we’ll lose another two million acres of farmland.”

A recurring theme in the two-hour hearing was the need to restore funding for The California Land Conservation Act of 1965, commonly known as the Williamson Act[5]. It lowers property taxes on farmland and open space in exchange for keeping the property in agriculture or open space for 10 years.

In 1972 the state launched the Open Space Subvention Act[6], which partially reimbursed counties for their lost property tax revenue. Averaging $23.3 million per year, it paid out more than $863 million from 1972 to 2009. Currently about 16.4 million acres in 53 counties are under Williamson Act contracts.

Due to the state budget crisis, the subvention budget was slashed to $1,000, forcing counties to absorb the costs for the past four years. Subvention funding has yet to be restored. Although lack of funding did not cause the disappearance of farmland in recent years, according to Lowrie, restoring the subvention payments was a concern of many of the farmland experts at the hearing.

Imperial County has pulled out of the Williamson Act program, and Colusa and Glenn Counties were seriously considering pulling out as well, according to Gamper. They’ve been hard hit by the loss of subvention funding, which once provided 22 percent of Colusa County’s General Fund budget, 15 percent of Kings County’s budget and 12 percent of Glenn County’s.

“With realignment and other burdens put on counties, I frankly think it’s amazing that more counties have not pulled out,” Gamper said.

The Williamson Act funding is not without its critics, however, including the Legislative Analyst’s Office. Nine years ago the LAO recommended phasing out[8] the subvention payments over 10 years. The LAO listed several reasons:

Fiscalization of land use

Another major contributor to the disappearance of farmland is the fiscalization of land use decision-making, according to John Beckman, CEO of the Building Industry Association of the Greater Valley[9]. The term refers to the temptation of cash-hungry cities and counties to pave over farmland with shopping malls and car dealerships in order to increase sales tax revenue.

“They have a project come in front of them. And for true conservation, true farmland mitigation, for protection of farmland to occur, the local agencies need to deny those projects. But due to the fiscalization of land use, they don’t. When they have the opportunity, they say yes to new development, and they say no to farmland protection.

“A lot of the local jurisdictions have decided that they want to try to do farmland mitigation, but they want their project at the same time. They’ve come up with this myth that they can have their cake and eat it too. They want to say yes to the project and create some kind of mythical preservation of farmland by requiring an easement some place else.”

“[They] do not mitigate the loss of farmland,” he said. “In fact, typical agricultural easements do not even preserve farming. The easement programs that we have in place today merely protect dirt. That’s a common saying among farmers that I talk to. We need more policies that protect farming and farming families, and less policies protecting dirt.”

An example of this occurred in 2005 when Colusa County sued the California Wildlife Conservation board[10] to stop it from using a conservation easement to convert 235 acres of farmland under Williamson Act contract into wetlands, ponds and open space. The county won the suit, but the state is still dragging its feet on compliance, according to Colusa County Supervisor Kim Vann.

Another contributor to farmland disappearance is the solar industry. Between 35,000 and 40,000 acres are planned for solar development in the San Joaquin Valley, including southern San Joaquin, Fresno, Kern and Kings counties, according to Lowrie. Imperial County officials are also considering going solar after their water supply was cut back, said Assemblyman Brian Dahle[11], R-Bieber.

That could be the tip of the solar iceberg, given the state’s environmental politics, warned Gamper.

“Surprisingly, there are zealous advocates for utility scale photo-voltaic solar development in both the current and previous administrations [of Gov. Arnold Schwarzenegger and Gov. Jerry Brown] that argue that local jurisdictions need to immediately sacrifice 100,000 acres of prime farmland for solar photo-voltaic development, and another million acres by 2050,” he said. “That’s 12-½ percent of our remaining resource to be put under solar panels. Frankly, I think it’s an absolutely insane idea.”

Chairman Eggman, who comes from a farming family, ended the hearing on a positive note, while acknowledging that the problem is as difficult to solve as the homeless issues she used to work on.

“Farmers have done better than they’ve ever done before,” she said. “Some things are going right for the farming community. We’ve heard a rich exchange of ideas. The solution is not as easy as we’d all like to think it might be.”