Examples of local media bias in favor of the Sacramento Kings arena subsidy, as well as their vehemence against the people’s right to vote on the subsidy, can be found everywhere — the Sacramento Bee, ABC, CBS, NBC and Fox News affiliates, and local radio stations. 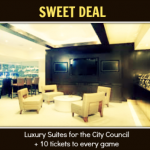 No longer is reporting the news enough apparently — the local media seems to want to be a part of the news. And why not? They stand to benefit handsomely should a new basketball arena be built in downtown Sacramento.

Most recently, Sacramento’s ABC Channel 10 News reporter Bryan May[2], who says he has been covering the Sacramento Kings and the arena story for 10 years, posted a comment on Twitter calling a Sacramento Taxpayers Opposed to Pork[3] signature gatherer a liar, for saying that the arena deal will cost of the public $800 million.

Wow, just had someone from STOP knock on my door & ask me to sign petition “before city spends $800m of your money.” When will the lies end

Looking out for Sacramento taxpayers

Public policy watchdog Eye On Sacramento[6], recently researched and did a story on the Goldman Sachs documents showing that the City of Sacramento intends to borrow $304 million — $92 million more than the $212 million that the public were led to believe.

Eye on Sacramento estimates that the average Sacramento family’s share of arena bond costs will amount to a whopping $5,200. The watchdog group said because the city is not using a traditional 25-year term bond with fully amortizing annual payments, and “instead plans to issue an exotic 35-year bond that doesn’t start to fully amortize for 21 years, the city will incur $196 million in higher, unnecessary interest costs over its term, a stunning 73 percent hike in public costs.”

The watchdogs are lapdogs

“When you’re playing a shell game, you keep everything spinning,” wrote[7] Paul Glegg on his blog, Game to 100[8]. Clegg is a former editor and writer with The Sacramento Bee. “You use whatever diversionary tactics you can to distract attention. You put shills in the crowd to whip up excitement. You never want the suckers to figure out they’re being taken for a ride.”

Glegg, who was with the Bee for 32 years, was referring to the new arena project for the Sacramento Kings basketball team.

“The manipulators trying to rip off at least $258 million from the public to build a downtown arena have been playing fast and loose to keep their shell game going. Led by Mayor Kevin Johnson, they’ve sidestepped a public vote on the issue, concocted ridiculous economic benefit projections and pushed a city deeply in debt toward financial peril.”

Glegg explained[9] how arena proponents have been greatly assisted by a local media “willing to sacrifice their watchdog role because of their own self-interest.”

“The Sacramento Bee and local television stations have a big stake in keeping the Sacramento Kings in town,” Clegg said[10]. “The media are the cheerleaders whipping up the crowd.”

Sadly, Clegg is right. News 10’s Brian May is just one of many local sportscasters and journalists who have been pushing the heavily subsidized arena, while on-air, on the radio and in newspapers.

And Clegg doesn’t sugarcoat his former employer’s major role in this con. “The Bee has gotten on its high horse and is demanding the kind of accountability, transparency and accuracy from STOP that it has never demanded from Mayor Johnson and his back-room buddies,” Clegg said. “The newspaper’s front-page placement of the stories is designed to suggest major skullduggery by power players in the arena fight. Innuendo and guilt-by-association are used to up the journalistic ante.”

“I guess the newspaper’s editors realize that many residents are finally becoming aware how much their quality of life will deteriorate if the city siphons millions and millions of dollars from the public treasury to pay for an arena. The editors know voters will reject a subsidy to help billionaires and big developers reap a profit, and they know their own vested interests in the project will suffer.

“In January, city treasurer Russ Fehr issued a stunning report on the city’s expanding debt obligations: The city was approaching $2 billion in debt, half in outstanding borrowings, the other half in rapidly rising liabilities for employee pensions and retiree health care costs,” Powell recently explained[11].

“The city’s ratio of total debt to general fund revenue ($372 million) ranks among the highest in the country, which puts the city at greater risk of insolvency, particularly during economic downturns (like the one we’re slowing exiting),” Powell wrote in “Red Ink: Proposed Arena Bond Would Add To City’s Rising Debt.[12]”

And here’s the real kicker:

“An NBA arena typically becomes functionally obsolete just 18 to 20 years after it’s built,” Powell said. “As a result, annual payments will likely be payable on the bond for 15 to 17 years after the new arena has reached functional obsolescence, putting the city in the likely position of having to finance a second arena (to keep the team) while still making jumbo payments on the first one (if it even still exists).”

He added: “By that time, of course, every current councilmember and senior city manager will have almost certainly moved on. But city taxpayers will still be here, scrambling to handle the arena deal’s heavy legacy costs.”