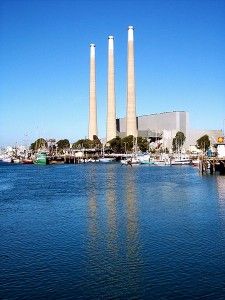 Then Dynergy Energy announced last month it would decommission [2]the Morro Bay Power Plant[3] whose three tall smokestacks for 50 years have become almost as big a symbol of the city as its looming Morro Rock.

The plant is one of 19 gas-fired power plants[4] along the coast of California, comprising 5,500 megawatts of power generation to be phased out of operation to protect marine life (see map here[5]). The City of Morro Bay has proposed to permit a commercial and tourist redevelopment project[6] on the power plant site.

The major reason for mothballing the power plant was its negative impact on marine life. Thousands of fish larvae got sucked into the power plant’s ocean water inlet.  However, mature fish could not get pulled into the inlet because each inlet tube is only 3/8-inch wide.

Moreover, as in George Orwell’s “Animal Farm,” in California some animals are more equal — and valuable — than others. In line with the new priorities of renewable energy, fish seem to be more “equal” than birds and turtles.

For example, there were 34 reported bird deaths[7] in Sept. 2013 attributed to BrightSource Energy’s 459-foot high tower that beams sunlight to thousands of surrounding mirrors at its Ivanpah solar energy project. Also threatened there: 2,325 juvenile desert tortoises[8].

But unlike fish on the scenic coast, the Ivanpah project is out of sight and mind, located 50 miles from the Salton Sea in the Mojave Desert.

No government agency has ordered an equivalent shutdown of the Ivanpah solar power plant.

By contrast, a natural gas-fired power plant, such as Morro Bay’s, would require one-fourth of the capital investment; would cost about $1,000 per megawatt installed; would be making four times the electricity at an 88 percent capacity factor; and would impact about 25 acres of land.  The California Solar Farm project is not economically feasible without large government tax credits[11].

It is estimated the power from California Valley Solar Ranch will cost ratepayers from $0.15 to $0.18 per kilowatt-hour. PG&E’s baseline electricity rate[12] is $0.11 per kilowatt hour.

Another option being considered by the city is to partner with Starwood Energy Group[13], based in Connecticut, to generate clean, renewable energy at the power-plant site.

Ironically, in 2009 Starwood already planned on building a large concentrating solar energy tower plant in Arizona[16] like the Ivanpah solar plant in California.  But the idea for the project ended up being abandoned. According to Reuters[17], “Lockheed Martin Corp was the engineering, procurement and construction firm for the Starwood project. [Arizona Public Services] said Lockheed Martin decided not to go forward with the project due to the size and the final risk profile of the EPC contract, among other factors.”

This begs the question: If a solar farm were constructed on the site of the old Morro Bay Power Plant, would environmentalists try to shut it down for killing birds, not fish?