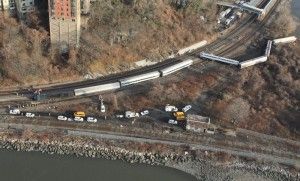 [1]Last Sunday, a Metro-North train in New York derailed, killing four passengers and injuring 67 others. Apparently the train engineer had been “nodding off”[2] and was unable to slow the train before it hit a curve on its route, causing it to derail. The tragedy is shining a new light on rail projects throughout the country — and it’s particularly relevant in California, a state that has spent the last half decade trying to build a high-speed rail system.

California’s high-speed rail project has been problematic for some time. The project has gone well over its original budget, and costs continue to pile up[3], often without ways to pay for them. The California rail — which has been characterized by mismanagement, passed deadlines, and broken promises — also faces significant legal hurdles. But beyond the challenges that CalWatchdog.com has already been covering, there’s another simple question: Just how safe are trains?

A good measurement for safety is “deaths per billion passenger miles.” A recent repor[4]t in the journal Research in Transportation Economics, titled “Comparing the fatality risks in United States transportation across modes and over time,” explained the different levels of danger.

While trains are significantly safer than cars — and notably more dangerous than buses and planes — there has been a recent uptick in the number of train accidents, according to the National Association of Railroad Safety Consultants and Investigators’ Robert Halstead.

Halstead, who did not respond to a request for comment from CalWatchdog.com, told National Geographic[5], “Train derailments have trended up over the last couple of years. Human factors are frequently found to be a contributing part, sometimes a causal part. This includes improper train handling and fatigue. You can also have technical failure regarding the signal system, the track, or other equipment.”

Railways are relatively safe. However, there are still ways that they can improve, according to Halstead. Simple measures like adding seatbelts could prevent deaths. The four killed last Sunday were ejected from the train. But there is more sophisticated technology available, known as the positive control system.

A positive control system essentially functions as an autopilot for train engineers. If an engineer nods off at a curve, for instance, the positive control system would reduce speed entering the curve. The futuristic technology will make trains even safer. And it’s mandated to be implemented on train systems throughout the country by the end of 2015 (though the deadline may be extended to 2020).

There’s just one problem: It’s extremely expensive. It will cost billions to implement it throughout the country. For Los Angeles’ Metrolink[6], it will cost more than $200 million to implement positive control systems on about 500 miles of rail.

It seems like a similar theme: Rail might someday be the best way to get around; it just costs a lot more than most people would hope for.