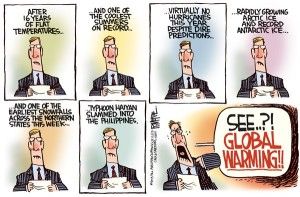 [1]AB 32 is the Global Warming Solutions Act of 2006[2]. It is cutting state greenhouse-gas emissions by 25 percent by 2020 to prevent further global warming. Along the way it’s killing manufacturing jobs[3] in this state — the kind of jobs that could pull our record levels of poor [4]people into the middle class.

Although California comprises just 2 percent of the global economy, AB 32 was supposed to inspire other states, the U.S. government and foreign governments to pass copycat legislation. That didn’t happen.

Now the proof keeps coming in that there isn’t any global warming, at least not any caused by us nasty humans. Writes science writer Michael Fumento in the New York Sun:

The 2013 hurricane season just ended as one of the five quietest years since 1960. But don’t expect anyone who pointed to last year’s hurricanes as “proof” of the need to act against global warming to apologize; the warmists don’t work that way.

Warmist claims of a severe increase in hurricane activity go back to 2005 and Hurricane Katrina. The cover of Al Gore’s 2009 book, “Our Choice: A Plan to Solve the Climate Crisis,” even features a satellite image of the globe with four major hurricanes superimposed.

Yet the evidence to the contrary was there all along. Back in 2005 I and others reviewed the entire hurricane record, which goes back over a century, and found no increase of any kind. Yes, we sometimes get bad storms — but no more frequently now than in the past. The advocates simply ignored that evidence — then repeated their false claims after Hurricane Sandy last year.

And the media play along. For example, it somehow wasn’t front-page news that committed believers in man-made global warming recently admitted there’s been no surface global warming for well over a decade and maybe none for decades more. Nor did we see warmists conceding that their explanation is essentially a confession that the previous warming may not have been man-made at all.

That admission came in a new paper by prominent warmists in the peer-reviewed journal Climate Dynamics. They not only conceded that average global surface temperatures stopped warming a full 15 years ago, but that this “pause” could extend into the 2030s.

Mind you, the term “pause” is misleading in the extreme: Unless and until it resumes again, it’s just a “stop.” You don’t say a bullet-ridden body “paused” breathing.

You do in a zombie movie, which is maybe what we’re living through.

Put on a warm coat and read the rest here[5].