Last week, U.S. Bankruptcy Judge Steven Rhodes ruled that Detroit[1] city workers’ pensions could be part of the Chapter 9 proceedings. So the pensions could be cut substantially. That obviously affects the federal bankruptcy trial for San Bernardino and, potentially, Desert Hot Springs [2]and other California cities.

Here’s the response[3] from the California Public Employees’ Retirement System:

In response to Judge Steven Rhodes ruling today that Detroit can impair current employee and retiree pensions as it moves through the bankruptcy process, the California Public Employees’ Retirement System (CalPERS) issued the following statement:

“The Detroit court failed to recognize the difference between a two party contract and the unique nature of a state public employee retirement system, which creates a three-way relationship among a public agency, its employees and the retirement system. In California, our members’ vested rights to their pensions are protected by the California constitution, statutes and case law.

“Unlike Detroit, CalPERS is not a city pension plan. CalPERS is an arm of the state and was formed to carry out the state’s policy regarding public employees. The Bankruptcy Code is clear that a federal bankruptcy court may not interfere in the relationship between a state and its municipalities. The ruling in Detroit is not applicable to state public employee pension systems like CalPERS.

“The ruling is short-sighted and does not take into account the promises made in exchange for the financial and physical investments that public employees and retirees make in our communities.

“CalPERS will continue to protect and champion the public employees and retirees who serve California every day.”

Two things need to be noted. First, notice which party isn’t even mentioned by CalPERS: you, the California taxpayer. CalPERS will not “continue to protect and champion” you. You’re stuck paying the bill even if that means your city effectively dissolves — with all police, fire, parks, roads and other functions canceled — and the city only existing to pay the pensions of long-retired workers.

Second, it’s touching how CalPERS has faith that the California Constitution presides; that the courts will interpret it according to the wishes of CalPERS; and that the federal government won’t say federal courts, federal laws, and the federal Constitution don’t trump California legalisms.

In fact, constitutions and laws are playthings for courts, legislators and chief executives. Look at the legal gyrations[4] involving same-sex marriage in California in just the past 15 years. 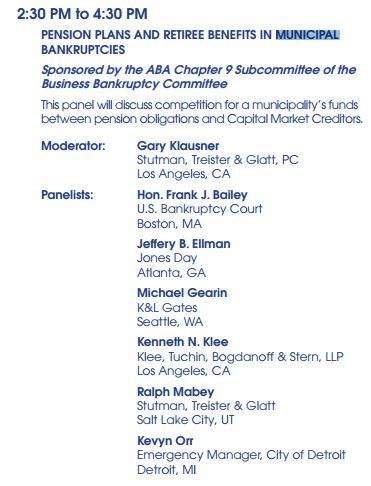 [5]Judges of all kinds, including bankruptcy judges, meet all the time for conferences. It’s a nice junket, paid for by taxpayers, and they discuss off-agenda matters over martinis and golf. The National Conference of Bankruptcy Judges threw a big bash in Atlanta[6] just over a month ago. Nearby is a screen shot of the Oct. 31 panel on municipal bankruptcy.

Description: “This panel will discuss competition for a municipality’s funds between pension obligations and Capital Market Creditors.”

Notice one of the panelists: “Kevyn Orr, Emergency Manager, City of Detroit, MI.”

The judges obviously are aware of the municipal pension problems plaguing many cities, and likely won’t want their dockets stuffed with hundreds of cases. And they likely won’t want a passel of municipal bankruptcies bleeding red ink into state budgets. (Technically, state’s can’t go bankrupt; but they can become insolvent.)

So they’re letting CalPERS and the other pension funds know that the funds better start getting a little more reasonable, or they’ll all end up like Detroit.

Oh, and this also was from the brochure for the bankruptcy judge convention: