So it’s been clear for years[1] that when it comes to the bullet train, Gov. Jerry Brown has lost Sac Bee news columnist Dan Walters.

This weekend’s column[2] makes it clear that the LAT’s George Skelton is about to jump off the bandwagon. Skelton gets to the key question: Where’s the money to finish the initial 300-mile segment? Every other obstacle is at least possibly finessable, but not a huge cash shortage when there’s no good option to find the funding:

“It’s astonishing that a seasoned governor who fancies himself a prudent spender refuses to recognize the need to secure financing before embarking on the largest public works project in California history. …

“Brown equates critics of the bullet train with initial opponents of the transcontinental railroad, the Panama Canal, the Golden Gate Bridge, the interstate highway system and the State Water Project, among other ambitious endeavors. But that’s distorting history. Those projects were paid for by dedicated revenue streams — fuel taxes, water fees, bridge tolls — or the federal government.

“If European and Asian countries can build high-speed rail lines, the governor asserts, there’s no reason California can’t. But they’re countries. We’re a state. No state has ever created a bullet train. And unlike Washington, Sacramento can’t print money.”

Confident prediction: Morain to remain in tank for bullet train 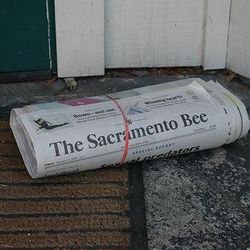 But what will the other big wheel in the Sacramento pundit scene do, especially now that he’s more powerful than ever? I refer to Bee opinion columnist and now newly enthroned editorial page editor Dan Morain.

I say no way does he stop colluding with rail authority chair Dan Richard to spread the Kool-Aid that minimizes the project’s giant flaws and personally attacks critics. The Bee just had an astonishingly dishonest editorial[3] on the bullet train’s court setbacks that didn’t even mention the financing nightmare cited by Skelton. And then there’s this specific insight into Morain’s thinking and values: In the middle of August, there were two provocative new stories out about the project.

The first was huge and continues to shape a new reality. It was Judge Michael Kenny’s initial ruling that the rail authority didn’t have a firm, adequate financing plan or sufficient environmental reviews for the first 300 miles of the project, as specified in state law. This angle is meaty and substantive.

The second was an insider’s story about Rep. Jeff Denham, R-Turlock, and how his attempt to create an obstacle to the project with federal regulators seemed about to backfire on him because it might let the state declare that its compliance with federal enviro rules meant it didn’t have to comply with the California Environmental Quality Act.

Morain wrote a lengthy column[4] about the second angle that mentioned the first development in passing. This angle is juicy, to be sure, but the way Morain covered it amounted to amplification for the sneering Jerry Brown narrative that bullet-train opponents are both dumb and bad people.

As for Denham, he may have gotten the last laugh. The federal regulators he wanted to get involved — the Surface Transportation Board — last week refused the state’s request[5] for quick approvals of the rail project’s first link, and the board’s vice president said the bullet train’s financial fitness must also be thoroughly evaluated.

But at least Skelton is no longer part of the disinformation campaign.