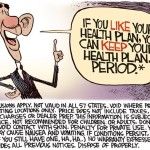 The problem is, for millions of Americans, it is not true. Millions of previously insured Americans have received cancellations from insurance companies. Doctor groups are not part of the exchanges.

And the problems are only getting worse — now you may not be able to keep your prescriptions.

“If you like your medicines, you may not be able to keep them under Obamacare,” health policy analyst Scott Gottlieb wrote[2] in Forbes. “Health plans are cheapening their drug formularies — just like they cheapened their networks of doctors. That’s how they’re paying for the benefits that President Obama promised, everything from free contraception to a leveling of premiums between older (and typically costlier) beneficiaries, and younger consumers.”

The Affordable Care Act is one big ponzi scheme.

The system won’t work without doctors.

“An estimated seven out of every 10 physicians in deep-blue California are rebelling against the state’s Obamacare health insurance exchange[3] and won’t participate, the head of the state’s largest medical association said,” the Washington Examiner[4] recently reported.

Doctors can’t work for free. Many doctors run small businesses. “We need some recognition that we’re doing a service to the community,” California Medical Association President Dr. Richard Thorp told the Examiner. “And we can’t do it at a loss. No other business would do that.”

One California doctor said Medicare reimburses a return doctor office visit at $76 in San Diego, California. The Medicaid reimbursement is only $24. Medicaid[7] is government health coverage for low-income and welfare recipients.

Covered California has been secretive about its plan reimbursement rates, and doctors now say rates will be close to the Medicaid reimbursements. Doctor networks cannot afford to work for a fraction of the cost.

Another ‘glitch’ — Phishing for personal data

Some Healthcare.gov users are reporting they were told their user password was incorrect, and then the website directed them to a “forgot password” page — which asked for highly personal information.

Politico[8] reported The D.C. insurance exchange where thousands of Hill aides are shopping has confirmed that an outside scammer is redirecting customers to a fraudulent website.

“Some shoppers are being directed from the insurance website to an outside site that appears nearly identical to the real exchange, officials confirmed Friday,” Politico reported[9]. “The fraud is widespread enough that they’re considering adding disclaimers to its website to warn users against divulging their check card or PIN numbers.”

“Yes, we have heard of it. There is definitely a phishing scam from an outside source,” said Richard Sorian, a spokesman for D.C. Health Link.

A notice [10]on the exchange’s website warns consumers against being “fooled by fake websites claiming to help you.”

How do you know if you are on a fake Obamacare exchange website? If it doesn’t crash.