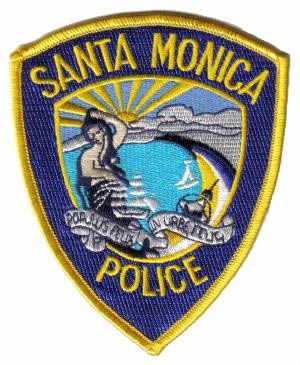 Santa Monica is one of the great places to be in the world, not just California. It has incredible weather, often in the mid-70s in August when the San Fernando Valley is baking, lots of great restaurants and a surprising number of really cool used bookstores[1]. It’s not as rough as Venice or as snotty as Brentwood.

Which brings us to the usual arguments in defense of insanely high pay for police officers. Does the following really have to happen[2] in Santa Monica to attract a decent police force? In a city where leaders brag of “historic lows” in crime? I refuse to believe it.

“Twenty-eight members of the Santa Monica Police Department made more than $200,000 last fiscal year, according to documents provided by City Hall.

“Santa Monica consistently has some of the highest paid police department members in Los Angeles County, according to State Controller’s Office records from the past several years.

More cops make $200K in Santa Monica than in LAPD

That’s from the tiny Santa Monica Daily Press. Unlike a lot of newspapers, both large and small, this one understands the importance of context in pay and compensation stories about public employees. Little, peaceful Santa Monica has more cops making $200k a year than, yes, its immense neighbor to the east, south and north.

“This fiscal year, the department has a budget of $77 million and 206 uniformed officers.

“Twenty-seven members of the Los Angeles Police Department made more than $200,000 in 2012, according to the Los Angeles City Controller’s website. The LAPD has a budget of $1.189 billion.”

Now why is this happening in put-upon Santa Monica? There does appear to be an unusual amount of overtime paid for by private businesses. But there’s also the fact that Police Chief Jacqueline Seabrooks sounds just like the head of the police union when talking about how wonderful Santa Monica cops are and why comparisons with other cities are, for some reason, just not fair.

It’s a great example of the Metropolitan Water District of Southern California governance model[3]. When the bureaucrat at the top of the management chain benefits from insanely generous compensation practices, he or she is way less likely to try to challenge or change those practices.

“Alhambra, which is one of the closest cities to Santa Monica in Los Angeles County in terms of population size, has an annual police budget of about $22 million. No members of the Alhambra Police Department made more than $200,000 in 2011, the last year that wage information was readily available on the State Controller’s website. It should be noted that Santa Monica drew more than 7.3 million visitors last year and Alhambra is not a tourist hub.

“Redondo Beach, which is a tourist destination but has a little more than two-thirds of the population of Santa Monica, is spending $33.6 million on its police force this year. Redondo’s Chief of Police topped their list at $201,000 in 2011, according to the State Controller’s Office.

“Beverly Hills, which has a population about a third of the size of Santa Monica, paid 18 cops more than $200,000 in 2011. Its police department budget was more than $53 million last year.”

Any explanation ‘would not be sufficiently expansive’ 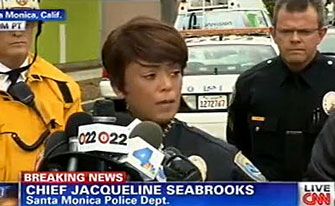 So how can these big gaps with similar cities be? That was what the Daily Press asked Seabrooks. Her answer was gibberish — completely vapid and empty spin.

“There are a number of factors to take into account when breaking down Santa Monica’s well-paid police department, Seabrooks said in an e-mail.

“’Any treatment I would give here would not be sufficiently expansive to provide the appropriate understanding of the dynamic,’ she said.

“More than half of the SMPD have bachelor’s degrees or higher, Seabrooks said at a meeting with the Daily Press earlier this month.”

It’s 2013. We’ve been hearing about stuff like this for a decade. When will it ever stop?