Karen Velie is the co-founder and publisher of CalCoastNews.com. While in the process of working through the San Luis Obispo County Social Services system to become her grandchildren’s guardian, Velie was arrested for a DUI on Aug. 13.

Because of the DUI allegation, Social Services then took the grandchildren from her and placed them in a foster home. However, eyewitness testimony from former state Sen. Sam Blakeslee maintains that she was not intoxicated.

I called Lee Collins,[2] the director of Social Services in San Luis Obispo County. His office told me that he wouldn’t be able to comment “due to legal issues. Our hands are pretty much tied.”

As to the DUI, here is the police version of the arrest, from an Aug. 23 memorandum[3] by Police Chief Stephen Gesell to the San Luis Obispo City Council (full memorandum reproduced below):

“On 8/13/13 Karen Velie was arrested by San Luis Obispo Police Officer Joshua Walsh for Driving Under the Influence of Alcohol. Since the arrest Ms. Velie and others have made public statements in speech and print claiming she was targeted due to her position as a reporter for the Cal Coast News. Those statements are false and the Police Department is releasing the following information to provide accurate factual background as to the events leading up to Ms. Velie’s arrest….

“During Officer Walsh’s contact with Ms. Velie, he observed objective indications of alcohol intoxication, including slurred speech, bloodshot and watery eyes and an odor of alcoholic beverage consumption, which led him to believe she was driving impaired…. Based on Ms. Velie’s answers to questions and her poor performance on the field tests, Ofc. Walsh concluded Ms. Velie was driving while impaired.”

Further, a breath test “measured a Blood Alcohol Content (BAC) of 0.79 at the scene of the stop.” This was below “a per se threshold of 0.08 at which it is unlawful for any person to operate a motor vehicle” in one section of the law. Later breath tests “registered a 0.07” and “a 0.06.”

In other words, according to the BAC test, she was not drunk.

But in another section of the law, Gesell’s letter relates, violations “are based on an officer’s evaluation of the totality of the circumstances. In this instance, Officer Walsh reasonably believed the evidence he observed supported a conclusion that Ms. Velie was impaired….”

She was arrested and her court trial is scheduled for Jan. 11.

“I was present the evening that she was teaching the bridge class. I saw no evidence of any impairment. She visited with me and our table, our bridge table, probably within the last five to 10 minutes of the evening. And she discussed how to bid a particularly complex hand. And I listened very attentively to her description, as I am trying to learn how to play bridge. And I am absolutely sure that if she had been impaired, I would have noticed it, because she would not have been speaking clearly, or would have been confused on such a complex topic. I thought she was completely lucid.”

According to the arrest record, also reprinted below, the incident was videotaped by the police. I requested a copy of the video from the San Luis Obispo Police Department. Captain Chris Staley replied in an email:

“Mr. Seiler, pursuant to Government Code section 6254(f)[4], the video is considered a record of a police agency investigation, and is exempt from public disclosure; therefore we will not be releasing the video.

The New Times of San Luis Obispo also ran story it, “Just breathe: A police report and city memo counter CalCoastNews founder Karen Velie’s account of her arrest and conspiracy claims[6].” The New Times story provided the links to the documents that are reproduced below. 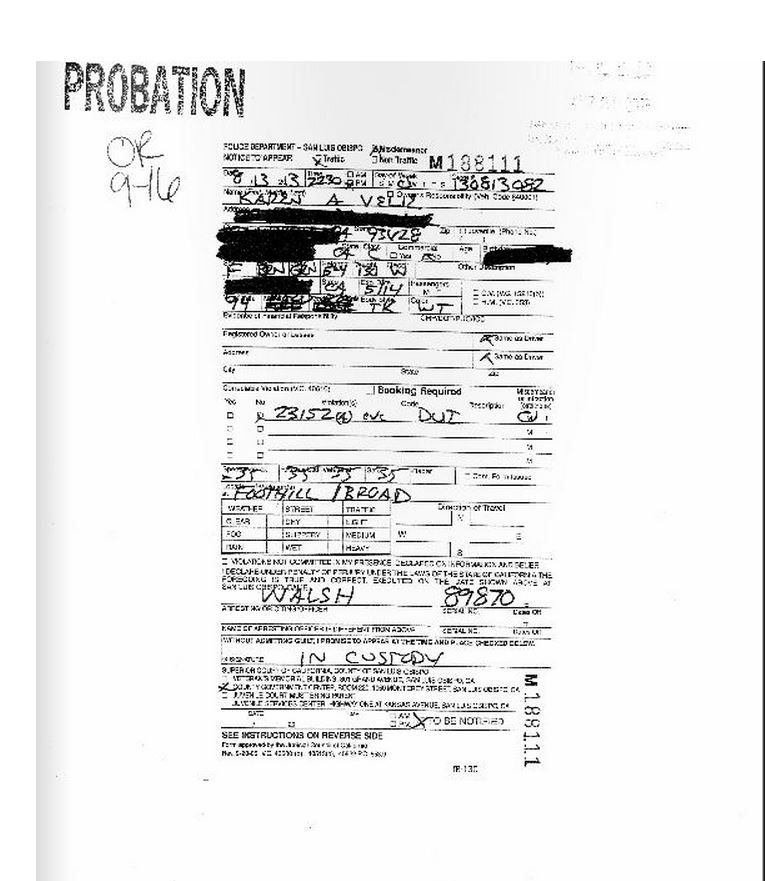 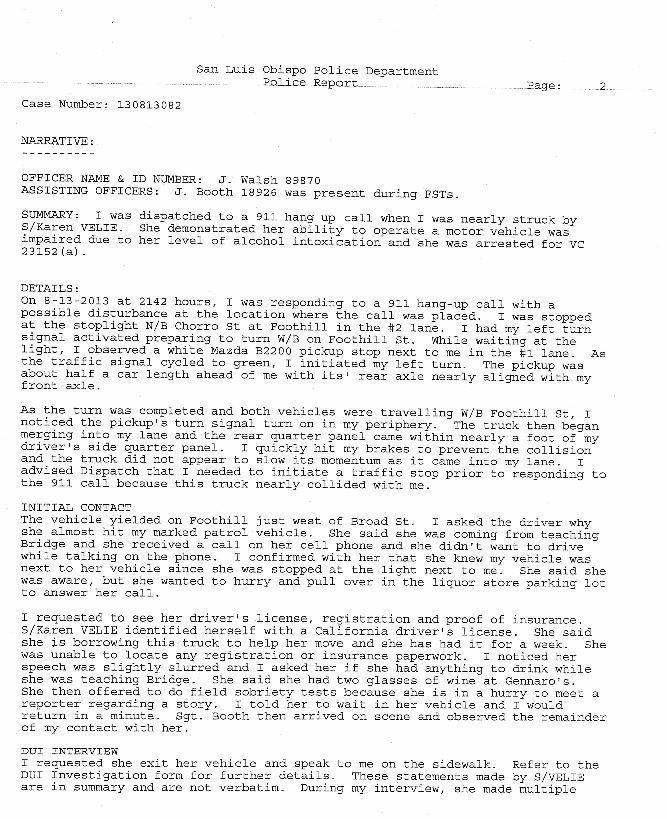 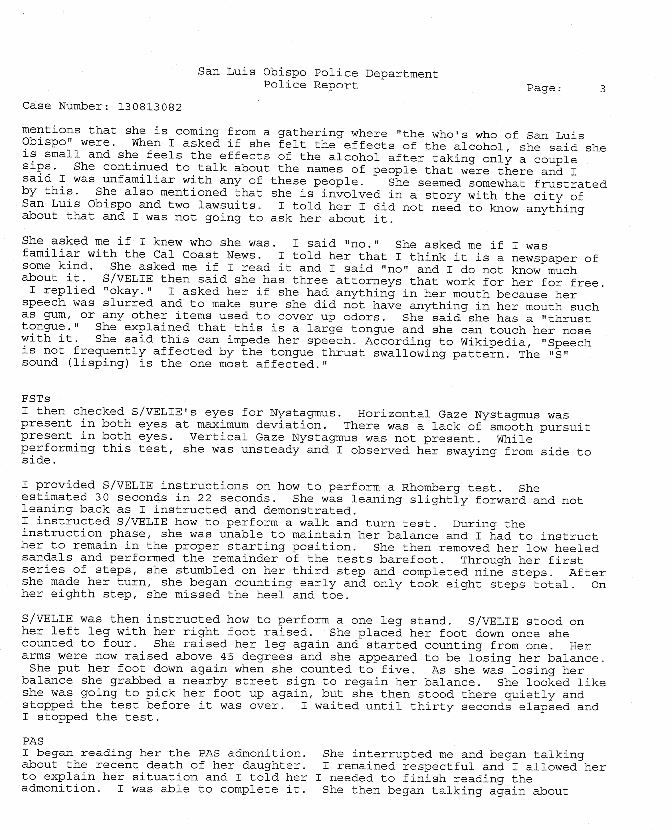 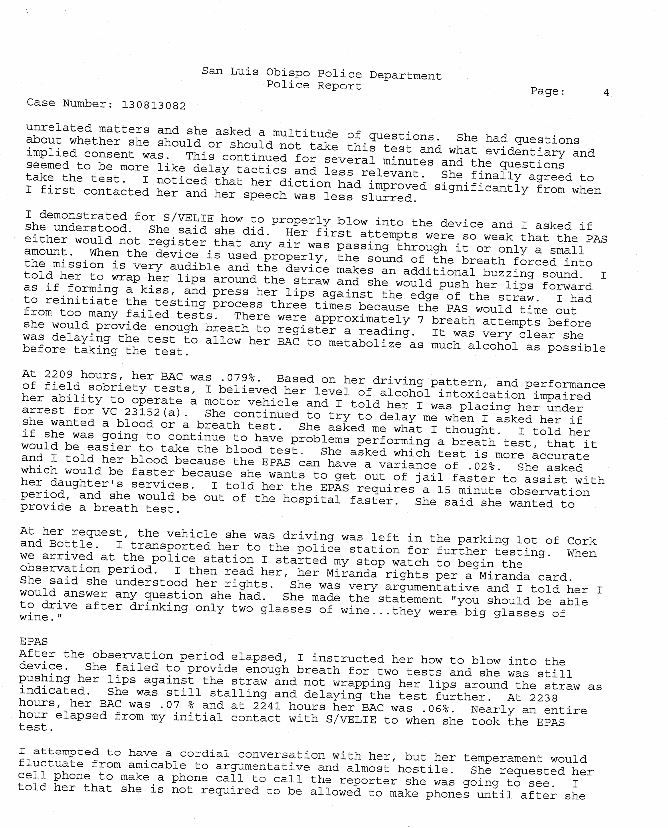 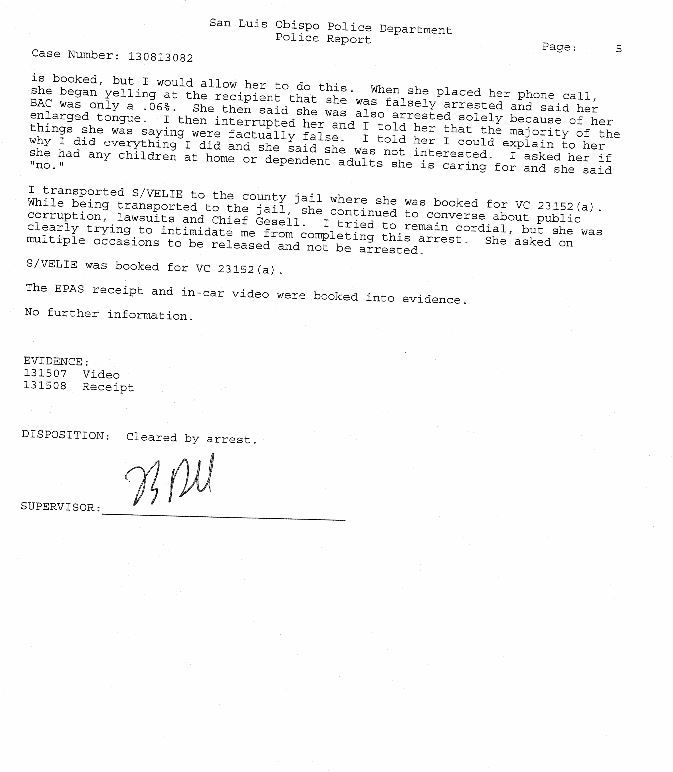 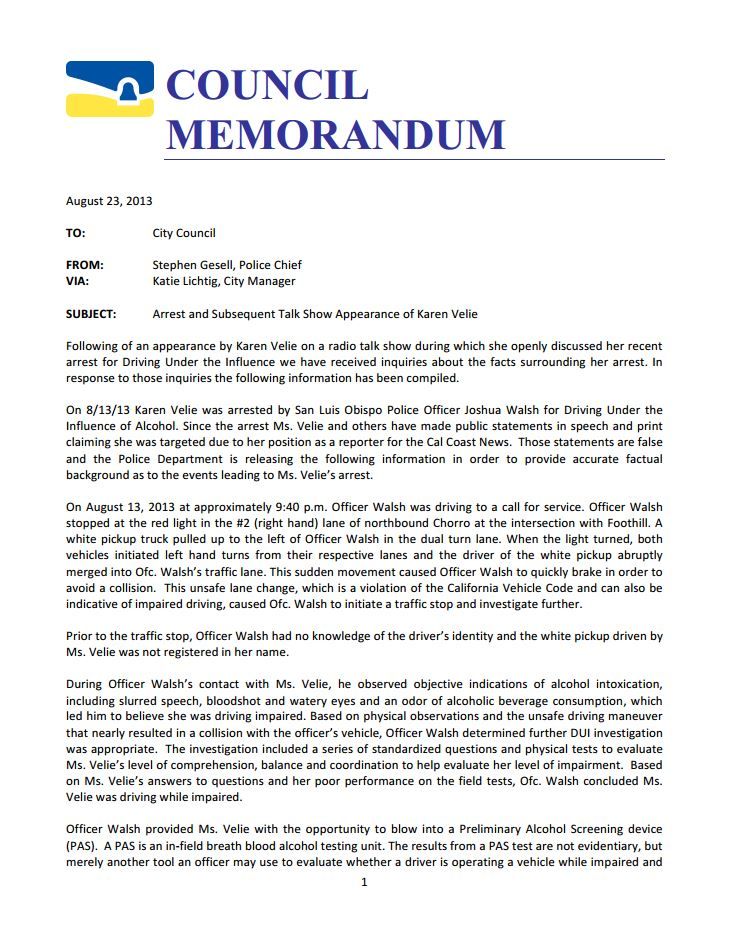 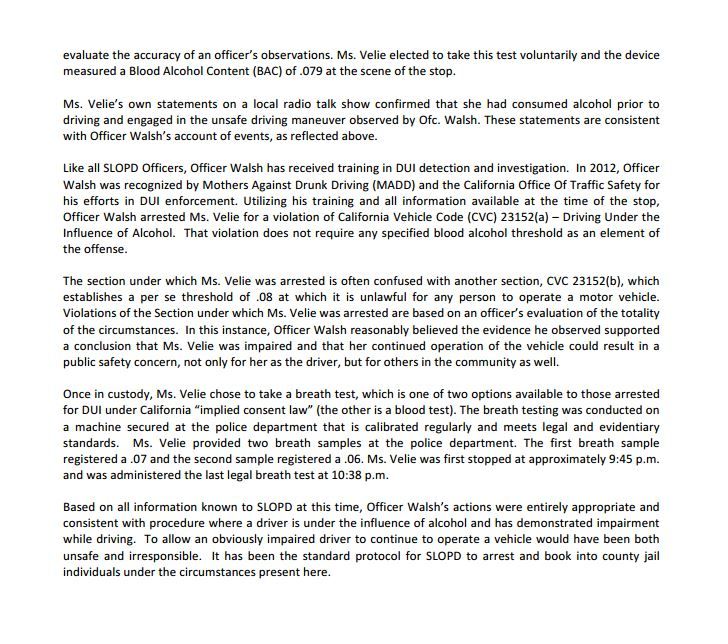