[1]New questions have arisen about the subject of several stories[2] I wrote last spring about the construction debacles on the San Francisco/Oakland Bay Bridge repairs. In May, I covered a report[3] of the concerns of engineer Yun Chung.

The 1989 Loma Prieta earthquake[4] struck with 6.9 magnitude and shook up much of Northern California, killing 63 people. Of them, 42 died when a chunk of the Cypress Street Viaduct of the San Francisco/Oakland Bay Bridge collapsed.

It took almost 24 years and $6.4 billion, but the span finally reopened in September[5].

What follows will bring the reader up to date on recent developments.

Reported the Sacramento Bee this week[6], “Yun Chung, a retired engineer and metallurgist, read the official report explaining why massive, high-strength steel rods on the new San Francisco-Oakland Bay Bridge broke last March and was stunned – then alarmed. … He concluded that the analysis defied metallurgical science and common sense.”

Chung, who specialized in high-strength steel analysis for the nuclear power industry, reported that Caltrans only focused on the hydrogen effects during the production process. Chung said some rods could pose long-term risks. “I want Caltrans to have the right understanding of the problem,” he said, “Then they can have the right corrective actions.” 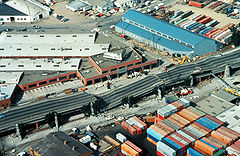 Chung then produced a new, supplemental report, “Main Concerns About Anchor Rods on the New Bay Bridg[8]e,” issued on Nov. 29. It was written with Lisa K. Thomas, a metals and metallurgical engineer at the Berkeley Research Company, and commissioned by the Bee.

“This supplement specifically focuses on the problems unique to the anchor rods for the main cable (also identified as PWS – Parallel Wire Strands) and the tower base. … This supplement is deemed necessary because TBPOC-Caltrans have been oblivious to the metallurgical conditions unique to these anchor rods, which may have HE [hydrogen embrittlement] susceptibility worse than other anchor rods, contrary to TBPOC- Caltrans’ expectations….

“TBPOC-Caltrans believe that their July 8, 2013 report has addressed and resolved all the questions and issues regarding the high strength steel anchor rods on the new Bay Bridge. This is untrue. There are several important questions unanswered and TBPOC-Caltrans are not even aware of some metallurgical problems facing the long term performance integrity of fracture-critical anchor rods.

“The truth is that TBPOC-Caltrans have no idea about the susceptibility of the most fracture-critical anchor rods to hydrogen embrittlement (HE). Their testing protocols including the Townsend KISCC (stress corrosion cracking) tests have completely missed the mark in connection with the validity of their remedial resolutions of the anchor rods for the main cable (Item 7, PWS – Parallel Wire Strands) and of the tower base (Items 12 and 13.3).”

The Bee reported, “Testing will continue through the middle of 2014 at a cost of $4.1 million, plus support costs.” Add the $4.1 million to the $6.4 billion cost to build the bridge … and keep counting.

“Caltrans, their contractors, and consultants have all missed this point. FHWA engineers neglected to consider the effects of cold thread rolling on HE failures when they calculated HE susceptibility risks using their own Greg Assessment Tool.”

Chung and Thomas found several errors in the Caltrans oversight committee’s report, concluding that there were “several signs that Caltrans engineers lack expertise in fracture mechanics based KISCC analyses,” after blindly copying incorrect information from a book by Prof. John Fisher and his co-authors during the May 8, 2013 Bay Bridge Briefing[12].

“Cal professor of civil and environmental engineering Abolhassan Astaneh-Asl [15]told us only a few hours before Wednesday night’s closing of the old span that he believed the new span is so deficient in its design and execution that it is much less safe than the old one. It was Astaneh-Asl who led a Cal team that investigated damage to the old Bay Bridge after the 1989 Loma Prieta earthquake[16] and determined that the structure’s foundations were sound.”

DeSaulnier, also chairman of the Transportation and Housing Committee, together with the Legislative Analyst’s Office, tried to form an independent task force to conduct oversight into Caltrans and the Bay Bridge safety issues. They requested legal indemnification through legislation under Senate Bill 110[17] for a panel of experts to move forward with a review.

“Task force members, however, did not wish to proceed absent being provided immunity, hence SB110, which contains an urgency clause so the task force can commence its work at the earliest possible time,” bill analysis [18]said.

The bill passed through both houses of the Legislature but was vetoed[19] by Gov. Jerry Brown, leaving DeSaulnier and the Transportation Committee to do their own investigation of the Bay Bridge.

“In the coming months, the committee will conduct a thoughtful examination of the problems that caused this project to be 10 years late and $5 billion over budget,” DeSaulnier said[20] following Brown’s veto of SB110. “The toll payers deserve answers. There are many lessons to be learned that can help us make Caltrans management more accountable and improve the outcomes of future mega-projects.”