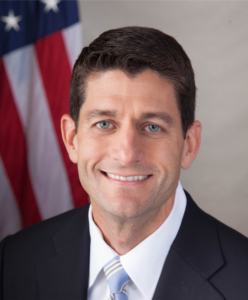 [1]January will begin in earnest the California mid-term election cycle. Although Gov. Jerry Brown’s seat likely is secure, assuming he’s running for re-election, Republicans hope to gain seats in the California Legislature and in California’s delegation to the U.S. House of Representatives. (No state U.S. Senate seat is up.)

But Rep. Paul Ryan, R-Wisc., just cooked up a budget deal that begs the question: Why Republicans? Here are the specifics[2] on the budget “cuts”:

“Mr. Ryan[3], at a joint news conference with Sen. Patty Murray[4], Washington Democrat, said the spending plan calls for reducing the deficit by $23 billion over 10 years without raising taxes.”

That’s a reduction of $2.3 billion a year, assuming a future Congress doesn’t reverse it. Which is out of a federal budget estimated to spend $3.8 trillion. So the “cuts” are less than 1 percent. Not increasing taxes is fine. But a future Congress could reverse that, and increase taxes.

“The Wisconsin Republican, the House’s chief budget writer, said the deal would reverse about $65 billion in previously agreed-upon automatic spending cuts to the military and other government programs.“

So, spending also will rise by $6.5 billion a year. Of course, in Congress Math, an automatic rise is not a rise, only reversing a “cut.”

“Earlier this year, I called on Congress[5] to work together on a balanced approach to a budget that grows our economy faster and creates more jobs — not through aimless, reckless spending cuts that harm our economy now, but by making sure we can afford to invest in the things that have always grown our economy and strengthened our middle class. Today’s bipartisan budget agreement is a good first step.”

Is he serious about “aimless, reckless spending cuts”? Too bad he didn’t spend any time in the military — I spent four years in the U.S. Army — he would have seen waste beyond his wildest dreams. Shaving a couple billion of Pentagon bloat wouldn’t damage defending the country at all, and actually would improve it by helping put the country on a sounder financial footing.

In the background of this debate remains the nagging of Prof. Laurence Kotlikoff of Boston University, who tallies the federal government’s unfunded liabilities — for Social Security, Medicare, federal pensions, military pension and medical care, etc. — at $222 trillion[6].

Paul Ryan, of course, is running for president. Although it’s hard to see how the Tea Party favorite will maintain that position by crafting a budget deal attractive to the president that Ryan, as a vice presidential candidate last year, opposed.

For Republican voters, it’s another case of their leaders selling them out.