A 6-year-old boy in Colorado was suspended from school for kissing a girl on the hand, and called a sexual harasser by school officials. 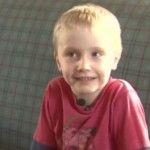 Only predatory lawyers and statist school bureaucrats could label 6-year old Hunter Yelton a sexual harasser for kissing a female classmate on the hand.

If serial sexual harasser, former San Diego Mayor Bob Filner[2], doesn’t have to register as a sex offender, Huntel Yelton should not be labeled one. Filner was just sentenced to home confinement, even after being charged with felony false imprisonment and two counts of misdemeanor battery, after more than 17 women brought lurid sexual harassment allegations against the former  Mayor and 10-term congressman.

“It was during class, yeah. We were doing reading group and I leaned over and kissed her on the hand. That’s what happened,” Hunter said.

“The focus needs to be on his behavior,” said School Superintendent Robin Goody. “We usually try to get the student to stop, but if it continues, we need to take action and it sometimes rises to the level of suspension,” reported KRDO in Colorado Springs.

Goody said Hunter’s record will remain within the district and that “his behavior fits the school policy description of sexual harassment, which includes unwanted touching,” KRDO in Colorado Springs reported[3].

“Our main interest in this is having the behavior stop because the story is not just about the student that was disciplined, it is also about the student receiving the unwanted advances,” Gooldy told HLN. “We have to think about both students in the situation.

What is sexual harassment?

Standard “sexual harassment” can include unwelcome sexual advances, requests for sexual favors, and other verbal or physical harassment of a sexual nature, according to the U.S. Equal Opportunity Commission[4].

“Although the law doesn’t prohibit simple teasing, offhand comments, or isolated incidents that are not very serious, harassment is illegal when it is so frequent or severe that it creates a hostile or offensive work environment or when it results in an adverse employment decision.”

What kind of predatory policy enforcer  suggests this kid is a sexual harasser?

School officials, including Superintendent Goody, have messed with the development of a little boy, whose care has been entrusted to them, and turned that into an abuse of that child.

A kiss on the hand by a six-year old school boy — even unwanted — is not sexual harassment.

In another era for example, when I was six, I would have socked Hunter on the arm, and wiped my hand off, if I didn’t want his kisses. And Hunter would be a better man for it.

School officials said regardless of his age, what he did fits their school policy code’s description sexual harassment and say the offense will go on his record.

I went through many of the news stories and news videos about Hunter’s kiss, and found the witch hunt appears to have been spearheaded by the school’s female principal, Tammy DeWolfe, but she was not named in most of the stories. Superintendent Goody was just the idiot front man.

The girl’s mother, Jade Masters-Ownbey, has also been outspoken about the kissing, and told the Canon City Daily Record[5] on Wednesday that the school district did a “great job” protecting her daughter from repeated harassment from the boy, MSN news reported.

She said she hoped people would not “start bashing the school that is doing a great job protecting my child from what is sexual harassment.”

School officials say Hunter is a repeat kissing offender and has had behavior problems. “Allegedly, he kissed the same girl on the cheek previously and was disciplined for acting out,” the Washington Examiner reported[6].

Hunter was suspended once before for kissing the girl and “had other disciplinary problems,” according to the school.

Hunter’s Mom said he has had a few scrapes at school with roughhousing, and has kissed the same girl. Hunter admits he has high energy.

Cañon City Schools Superintendent Robin Gooldy released the following statement to ABC News late yesterday: “The parents of the student and the principal met this morning. One of the outcomes of the conference was to change the category of the disciplinary offense from ‘sexual harassment’ to ‘misconduct’. The student has returned to school.”

And finally, this UPDATE late last night from KRDO[7]: “Today, the school district had a change of heart, and dropped sexual harassment from his record, now calling it misconduct.”

“Sandy Wurtele, a child psychologist, was critical about the district’s decision to punish the boy over the kiss,” KRDO reported. Wurtele is a child clinical psychologist who specializes in child sexual development and the prevention of childhood sexual abuse.

She said tough love in this case could have negative consequences. She said kissing is normal behavior for children of that age, the Gazette reported[8].

“For most 6-year-old boys, absolutely. That would be a normal behavior,” said Wurtele,

Wurtele said she was surprised to hear the school suspended him.

“That really gives mixed messages, negative messages to the kids,” she said. “This part of development is just as important if not more than their academic subjects.”

Wurtele said children at that age are simply curious about the differences between boys and girls. “I don’t think a 6-year-old would understand what harassment is,” Wurtele told KRDO.[9] “That has some longer-term implications.”