Tom McClintock, once the shrewdest guy in the Legislature, is now among the shrewder people in Congress. Last night the Northern California lawmaker sent out a column trashing the two-year budget compromise approved by the House at the behest of House Budget Committee Chairman Paul Ryan, R-Wis. Here it is in its entirety. 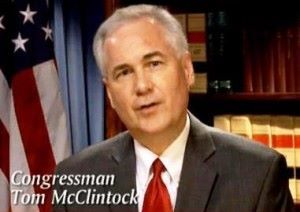 [1]The great irony of the Republican decision to bust the budget sequester is that barely two months ago, congressional roles were reversed.  The Democrats insisted on funding the government according to existing law.  The Republicans sought one simple change: that the individual insurance mandate under Obamacare be delayed for one year.  They were trying to spare the American people the Obamacare disaster that is now unfolding, but to no avail.  The American people sided overwhelmingly with the Democrats on the principle that the government should be funded according to current law without any side issues.

Why wasn’t that principle applied just two months later? Republicans were in the ideal position to hold the budget line simply by insisting on enforcing current law.  Instead, the House Republican leadership pushed through a two-year budget that will allow the federal government to spend an additional $63 billion more than current law allows – money that our country does not have.

Some of the discussion has focused on how much of the spending spree will be paid with higher taxes.  The answer is, “all of it.”  Once government spends a dollar, it has already decided to tax that dollar – the only questions that remain are who gets the bill and when.

Sixty-three billion dollars of new spending – and therefore new taxes in some form – is not a small amount of money.  It averages about $570 of added burdens for every family in America.

Not so, say supporters.  Over the next ten years, fee increases and spending reforms will pay for all of this, with $22 billion to spare for debt reduction.  The claim is a practical application of the economic principles of J. Wellington Wimpy:  “I will gladly pay you $22 billion in deficit reduction ten years from now for $63 billion in new spending today.”

The lie is given to this promise within the measure itself.  A major part of the alleged long-term deficit reduction is the assurance that after a two year spending binge, Congress will not only enforce the sequester but will even extend it for an extra two years in 2022 and 2023.  Pardon my skepticism.  We are required to believe that in the future, Congress will magically summon the fiscal discipline that has eluded it in the present.

A side deal called the “Doc Fix” offers more reason for doubt.  The “Doc Fix” has become an annual ritual arising from a previous budget deal that promised long term savings, except that Congress votes every year to ignore it (oops there goes another $8.7 billion).

True, discretionary spending will be less than the House budgets of 2011 and 2012, but this is a sleight-of-hand. Those budgets were unified packages of reforms that saved most on the mandatory side of the ledger and must be viewed in their totality -– not picking and choosing which parts to compare and which to ignore.

Finally, we are told that there are not enough votes in the House to support current-law spending.  There’s one way to find out: put a clean measure on the floor and see where the votes are.  That’s essentially how the impasse was resolved two months ago.

The sequester provided less than a third of the deficit reduction that Standard and Poors warned would have been necessary to maintain our triple-A credit rating, which is why many conservatives opposed it.  But it was at least a step in the right direction. It was an agreement that Congress made with itself, and given the political realities of a divided government, it became the only viable instrument to keep spending under some modicum of control. The busting of that limit now calls into question any promises of future fiscal restraint.

Perhaps the most stinging indictment of the budget deal comes from former Reagan budget director David Stockman. Under Stockman’s guidance, the Reagan administration reduced both spending and the deficit as a percentage of GDP, produced a period of prolonged economic expansion and won the cold war.   His verdict is chilling: “It’s a joke and betrayal. It’s the final surrender of the House Republican leadership to Beltway politics and kicking the can and ignoring the budget monster that’s hurtling down the road.”

The new Congressional budget is a mistake at a time when we can’t afford many more mistakes.  The path of least resistance, even if paved with good intentions, is not a path America can afford to travel any longer.

McClintock is a better writer than a heck of a lot of journalists. How do I know he wrote this himself? I hosted a talk-radio show for two years. He was one of the very few people I ever interviewed (Victor Davis Hanson was another) whose responses were always like cogent mini-essays. Thesis. Supporting evidence. Factual poke at opponent’s counterargument. Restate thesis.