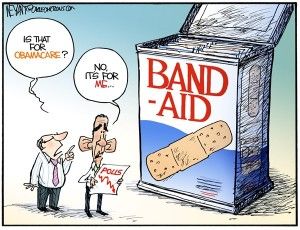 [1]If you are signing up for Obamacare, I hope you’ve already put your check in the mail. If you haven’t paid by Dec. 23, don’t count on having Obamacare insurance in January. As with all insurance coverage, the plan must be paid for before you are officially covered.

According to the U.S. Department of Health and Human Services[2], nearly 365,000 Americans have signed up for health insurance through state exchanges under Obamacare, or signed up using Healthcare.gov[3].

“Since October 1, 1.9 million have made it through another critical step, the eligibility process, by applying and receiving an eligibility determination, but have not yet selected a plan,” the HHS agency [4]said.  “An additional 803,077 were determined or assessed eligible for Medicaid or the Children’s Health Insurance Program (CHIP) in October and November by the Health Insurance Marketplace.”

But Healthcare.gov and state insurance exchanges are still not clear how many enrollees have actually paid for the coverage.

As I continue to warn in my news stories, columns and radio interviews, in order for the new Obamacare health coverage to actually take effect on Jan. 1, enrollees must pay their first month’s premium by Dec. 23, or Dec. 31 in some states.

The Dec. 23 deadline is only 10 days away. Insurance Business America[5] is warning, “tens of thousands of the applications still need to be entered into the online system.”

“Californians may find something special under the tree this holiday season: the gift of health,” Covered CA reports on its website.[7] “The ‘Give the Gift of Health[8]‘ campaign launched today by Covered California™ seeks to empower family members, particularly mothers and grandmothers, in urging young adults to enroll in affordable and quality health coverage through the agency’s health insurance marketplace.”

Are you kidding me?

This is as absurd as the Obama administration encouraging family members to “Have the talk[9]” at the Thanksgiving dinner table.

“The federal figures released Wednesday also show that 181,817 Californians have qualified for an expansion of Medi-Cal, the state’s Medicaid program for the poor,” the Los Angeles Times reported[10] yesterday.

“California’s enrollment accounts for 29% of the U.S. total. On Medicaid, California represents 23% of the national tally through November,” the Times said, trying to sound positive.

With 319 million people in America, and 38 million in California, these numbers don’t look very good.

In a new poll, Gallup estimates [11]17 percent of adults in the U.S. currently do not have health insurance, and  28 percent of the uninsured group are not planning to get insurance.

“…assuming they follow through on those intentions, that would mean a minimum of 5% of all U.S. adults would be uninsured, leaving the U.S. short of its goal of universal coverage,” Gallup reported[12] Dec. 3.

On the Covered CA website, it is unclear just how many Californians have actually successfully signed up, versus those who have made inquiries.

Covered CA does not have November enrollment numbers available yet.

Covered California is counting on insurance brokers to do much of the inputting client enrollment information into the health exchange computer system.

“’It currently takes over 90 minutes to enter the information from the application due to the slow exchange system,’ said Bruce Benton of Genesis Financial & Insurance Services in Sherman Oaks, Calif,” Insurance Business America reported[15]. “To have to go back at this late date and key in the data from paper applications I have already submitted to Covered California is extremely challenging and will take several days to process.”

“Obama and every senator/representative who voted for this ill prepared law should sit in their office completing apps for the folks,” an IBA reader wrote[16] in a comment. “They voted to put us out of business and hang us and now they want us to furnish the rope.”

Another reader asked[17], “So, what are all the newly hired navigators doing???”

The Obamacare ponzi scheme is growing.