‘Since voters are so stupid, let govt. make all decisions’

The pabulum voters are being fed has escalated to new heights… or lows as the case may be. 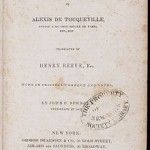 In a letter to the Sac Bee editor today, a reader claimed Alexis de Tocqueville [2]would have supported Sacramento City Council’s decision to forge ahead with the publicly subsidized arena without a vote of the taxpayers, since city officials have analyzed the issues, and we the taxpayers are not capable of this.

“We citizens do not have time to properly analyze and decide all the issues,” Sacramento Bee reader Brian M. Boone wrote[3].

Booned said[4]: “Alexis de Tocqueville, who wrote the classic ‘Democracy in America,’ noted that there are so many issues for voters in a democracy that our minds are at sea. So, elected representatives analyze the information and decide issues on our behalf after full consideration.”

Actually, Alexis de Tocqueville warned that modern democracy could and would be adept at inventing new forms of tyranny. And the constant push for radical equality could lead to the materialism of an expanding bourgeoisie, and to the “selfishness of individualism.”

Tocqueville worried that if despotism were to take root in a modern democracy, it would be a much more dangerous version than the oppression under the Roman emperors or tyrants of the past who could only exert a pernicious influence on a small group of people at a time.

We are nearly there.

Gov. Jerry Brown and his PR team are working overtime trying to convince the entire country California is on the road to economic recovery, thanks to Brown’s wizardry and tax increases. He and the Legislature claim we’ve had several balanced budgets, and are swimming in surpluses.

Never mind the billions California owes to the federal government for our the state’s growing unemployment problem.

…or the half a trillion dollars in unfunded and future pension obligations… these massive debts apparently do not count.

Nor do the commitments of the $100 billion high speed rail project, the $25 billion Delta Tunnels water project, or the California Air Resources Board’s determination to rid the state of all carbon emissions.

…Or the San Francisco/Oakland Bay Bridge project, which has been under repair since 1989 and has cost more than $6 billion dollars.

But we have surpluses

Finley was referring to the recent Legislative Analyst’s Office report[7] to the governor, which predicted a surplus of $3.2 billion at the end of the next budget year.

“The analysis also assumes that the state economy and revenues continue to grow steadily over the next decade—which is unlikely—and that the legislature won’t use the windfalls to pay down the state’s $70 billion liability for teacher pensions, which is probably not a bad bet.”

“Overjoyed by the good budget news, Sacramento’s liberal elves quickly got to work on a spending wish-list, which includes a host of pent-up desires such as universal pre-K and other child-care programs; middle-class college scholarships; a California version of Ameri-Corps; an infrastructure bank; and community college work force development programs,” Finley said[8]. “As usual, Democrats also want to expand welfare benefits, food-stamps and the state’s earned income tax credit.”

So when the Sacramento Bee reader announces, “We citizens do not have time to properly analyze and decide all the issues,” it’s hard not to want to scream.

Remember it was also Alexis de Tocqueville who said, “The American Republic will endure until the day Congress discovers that it can bribe the public with the public’s money.”

But never fear. Alexis de Tocqueville also believed, “The greatness of America lies not in being more enlightened than any other nation, but rather in her ability to repair her faults.”

We have work to do.