Nothing can change the shape of President Jerry Brown 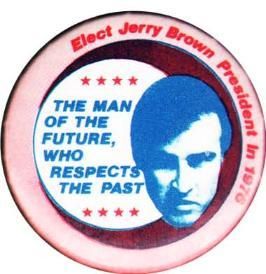 I well remember his first presidential bid, way back in 1976 when he was a young governor of 38 and I was a younger political writer of 21 on my college newspaper, the Hillsdale Collegian[3]. We’ve come a long way together, Jerry and I.

I naturally backed Ronald Reagan for president. Unfortunately, he lost the GOP nomination to Gerald Ford.

But I kept an eye on the Democratic nominees[4]. The most prominent among besides Brown:

* Alabama Gov. George Wallace, the segregationist. Although Wallace really was a populist, favoring whatever the people supposedly wanted: integration early in his career, then segregation, then integration later on. He was a reminder that Democrats belonged to the party of slavery and Jim Crow. 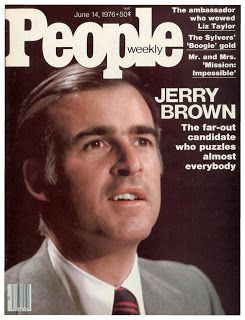 [5]* Rep. Morris Udall of Arizona, an environmentalist. When my family took a trip from Michigan to Washington, D.C. in July 1972, we visited our local congressman, Rep. Bill Ford, D-Mich. He took us to an event in the Capitol at which Udall spoke. Udall was pretty funny, a kind of Grand Canyon Jimmy Steward, and told some political anecdotes.

* Georgia Gov. Jimmy Carter, the eventual Democratic nominee and presidential victor over Ford. He ran as New South candidate, who rejected segregation and worked for racial reconciliation, showcased by his capital city, Atlanta.

Of Jerry Brown during that campaign, my impression from Michigan and extensive reading of both the liberal and conservative press (I had stopped watching TV almost entirely) was that he a flaky Californian playing on his image of youth and supposedly having “new ideas.” His actual slogan was, “The Man of the Future, Who Respects the Past.” See what I mean? 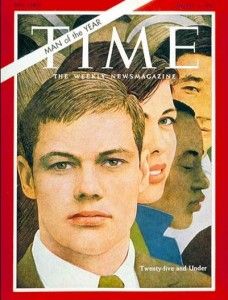 Back in 1976, Brown, although too old to be a Boomer, was considered a quasi-spokesman for “youth.” He had “new ideas” and “energy” and “spoke for young people,” etc.

As in his other campaigns for president, in 1980 and 1992, Brown started off slow but picked up steam and finished strong. But not strong enough to win the nomination. I think that’s because Democrats eventually got tired of the blather from the eventual nominees — Carter in the first two races, Clinton in 1992 — and wanted someone different. They cottoned on to Brown’s combination of Jesuit erudition (sometimes badly remembered[9]), Zen intensity, “Small Is Beautiful[10]” schtick, patrician heritage from his governor father and general flakiness.

It’s a formula that Californians have embraced six of the seven times he ran for statewide political office, and likely will do so again next year for his re-election.

Given that Brown is healthy, Reagan won two elections as a senior citizen, and apparent Democratic leader Hillary Clinton is an aging Boomer, Brown at 78 might have a chance. If he runs, Brown would campaign on the California “comeback” he keeps talking about, continuing to tout it as a national model.

Assuming he remains healthy, I think he’ll go for at, at a minimum giving me something to write about and endless chuckles. Not that I would support him. But I can’t ask much more of politicians.

I nominate this as the theme song for Brown’s presidential run. It’s from the cult 1968 movie, “Wild in the Streets[11].”