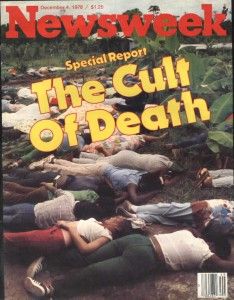 [1]John Podesta, President Obama’s new guru, just apologized [2]for saying of Republicans, “They need to focus on executive action given that they are facing a second term against a cult worthy of Jonestown in charge of one of the houses of Congress.”

On Nov. 18, 1978 in Jonestown in Guyana, a city he started and was named after him, the “Rev.” Jim Jones induced 912 of his followers to “drink the Kool-Aid[3]” spiked with Valium and cyanide, which is where we get that phrase. (Some accounts say it really was Flavor-Aid; other accounts say both drinks were used.)

I remember this well because at the time I was studying Russian at the Defense Language Institute in Monterey and read everything I could about the massacre in the California newspapers, which thoroughly covered it because of the state connection and Jones’ prominence in politics here.

The “Rev.” Jones actually was an atheist communist con artist who used religion to build a personality cult around himself. Watch this YouTube of him and followers praising the Soviet Union singing the Soviet anthem:

“Jim Jones, the strange and charismatic leader of Peoples Temple, proved a master at politically wiring San Francisco in the mid-1970s….

“Jones soon learned that his control over a well-organized, mixed-race army of some 8,000 dedicated followers gave him major stature with San Francisco’s liberal elite. Redevelopment had bulldozed the Fillmore’s political power into the ground. But now this strange white man with the hipster shades, Indian-black hair, and cadences of a black Bible-thumper seemed to be erecting a new political power line into the rubble-strewn, crime-ridden no-man’s-land. Jones could be counted on to deliver busloads of obedient, well-dressed disciples to demonstrations, campaign rallies, and political precincts. The city’s liberal Burton machine — run by congressional powerhouse Phil Burton — quickly identified the Peoples Temple juggernaut as a potentially game-changing ally in its long battle to take over city hall.

“It was Burton ally Willie Brown – a rising force in California’s state capital — who first recognized that Jones’s organization could play a pivotal role in his friend George Moscone’s run for mayor….

“In the December runoff between Moscone and [conservative Republican John] Barbagelata, Peoples Temple went even further to secure victory for its candidate. On the eve of the election, Jones filled buses with temple members in Redwood Valley and Los Angeles and shuttled them to San Francisco. Security at polling places was lax on Election Day, and many nonresidents were able to cast their ballots for Moscone, some more than once. ‘You could have run around to 1200 precincts and voted 1200 times,’ said a bitter Barbagelata later, after losing by a whisper of a margin. But he was not the only one who claimed that the Peoples Temple stole the election for George Moscone. Temple leaders also claimed credit.

“Moscone at first tried to appease him with a harmless post on the human rights commission. But the temple leader insisted on a position that had more clout, and the mayor decided he was in no position to alienate Jones. In October 1976 Moscone announced that he was naming Jones to the San Francisco Housing Authority, which oversees the operation of the city’s public housing. The agency, the largest landlord in the city, was a notorious maze of corruption, and it provided Jones’s organization with ample opportunity for shady self-dealing. A few months later, Moscone pulled strings to promote Jones, making him chairman….”

Jones was a little bipartisan, although not deeply involved in Republican politics the way he was with Democrats:

“But Jones was also happy to exchange mutually complimentary correspondence with the offices of then-former Gov. and future President] Ronald Reagan and statesman Henry Kissinger.”

And this presidential connection:

“During the 1976 presidential campaign, Jones wangled a private meeting with Jimmy Carter’s wife, Rosalynn, at the elegant Stanford Court Hotel on Nob Hill, arriving with a security contingent that was larger than her Secret Service squad. Later Jones accompanied Moscone and a group of Democratic dignitaries who climbed aboard vice presidential candidate Walter Mondale’s private jet when it touched down at San Francisco International Airport.”

And then- and current-Gov. Jerry Brown would not be left out of the fun:

“But no political figures were more gushing in their praise of Jones than Willie Brown and Harvey Milk, San Francisco’s rising tribune of gay freedom. Milk, a perennial candidate for office until he finally won a supervisor’s seat in 1977, aggressively sought Jones’s political blessing. ‘Our paths have crossed,’ Milk wrote Jones during an earlier campaign for supervisor, in a letter filled with the kind of awed reverence that the cult leader demanded from his followers. ‘They will stay crossed. It is a fight that I will walk with you into . . . The first time I heard you, you made a statement: “Take one of us, and you must take all of us.” Please add my name.’”

Podesta is from Chicago and has been a Democratic fixer and political operative for decades. So maybe he wasn’t aware of the Jonestown connection to his Democratic Party.

One question remains: As Podesta spruces up the Obama administration, will the prescription for fixing Obamacare include patients drinking the Kool-Aid?