Immigration reform in 2014? Not so fast 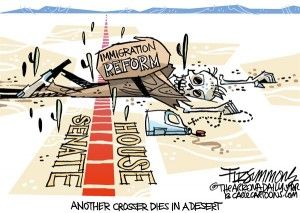 [1]One of the most poignant, and frequently discussed, political narratives to come out of Washington in the last year has been the relationship between House Speaker John Boehner, R-Ohio, on the one hand; and on the other hand the conservative wing of the Republican Party and outside conservative groups groups such as Heritage Action and the Club for Growth. Generally, Boehner has gone along with plans brought about by conservatives (such as attempting to use the government shutdown as a bargaining chip to defund or delay Obamacare).

Then conservative groups attacked the bipartisan budget agreement between Rep. Paul Ryan, R-Wis., and Sen. Patty Murray, D-Wash., which the full Congress just passed. It cuts benefits for veterans and raises fees related to air travel. And Boehner lost his patience with the more conservative wing.

Boehner lashed out at the groups[2] over the course of two days. Boehner said he thought outside conservative groups “have lost all credibility” and that he does not care what they do.

He later explained his outburst against the groups, saying, “Yesterday, when the criticism was coming, frankly I thought it was my job and my obligation to stand up for conservatives here in the Congress who want more deficit reduction, to stand up for the work that Chairman Ryan did.”

Boehner’s outburst wasn’t impotent. Despite opposition from outside conservative groups, the two-year budget deal passed the House 332 to 94. A majority of the Republican conference voted yes. It was a significant test of Boehner’s resolve against the more ideologically pure elements of his party. But the bet paid off.

No political win, however, exists in a vacuum.  Liberal activists — and even conservative moderates — immediately begin to suggest that Boehner’s move against the conservative elements of his party was the preface to Boehner reasserting establishment control over the legislative agenda.  Many have predicted that Boehner’s move was a signal that he was now willing to move immigration reform.

A California-based immigration reform activist, who spoke to CalWatchdog.com on the condition of anonymity to be more candid, said that Boehner’s recent behavior was “heart-warming” and seemed “honest.”

The activist, who has been involved in lobbying California Congressmen to push for reform, added, “It makes you think, ‘OK, maybe [Boehner will] play ball.’”

But he cautioned that, while activists are optimistic, they’re not blindly so. He expects that major immigration reform won’t be able to pass until 2015, at the earliest. It’s difficult to pass major legislation in an election year, he explained, and it makes more strategic sense (from the Republican point of view) to wait.

Republicans, who are at a politically advantageous position because of the trouble associated with the rollout of Obamacare, reasonably expect to pick up seats in the midterms. They could feasibly control the Senate — though that will be no easy task — by January 2015. So why would they pass immigration reform when they’re almost certain to pick up seats and enter a stronger bargaining position? The answer is simple: They wouldn’t.

So, yes, Speaker Boehner has changed his tune. But that doesn’t mean he’ll change his strategy just yet.