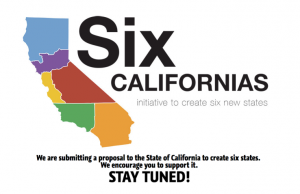 [1]California is a famously big state. It’s the most populous state and the third largest. California’s economy is bigger than many foreign ones. And the state has truly diverse economic sectors — entertainment, agriculture, technology, to name a few.

But the state’s great economic and geographic diversity has also created some divisions. Northern and Southern California often act as two separate states, only bound together by their shared statewide officials. Blue collar workers in the Inland Empire likely have little in common—politically, economically, or socially—with tech entrepreneurs in Silicon Valley.

Starting at the bottom, the new state of South California would be composed of Imperial, Orange, Riverside, San Bernardino, and San Diego counties.

Next to South California would be West California. The state would contain Los Angeles, San Luis Obispo, Santa Barbara, and Ventura counties.

The final, most northern part of California, would be divided into two states. Just north of Central California and Silicon Valley would be Northern California. The state would be composed of several countries, including: Amador, El Dorado, Marin, Napa, Nevada, Placer, Sacramento, Sierra, Solano, Sonoma, Sutter, Yolo, and Yuba.

And the final, most northern state, would be Jefferson. The theoretical state would be made up of Butte, Colusa, Del Norte, Glenn, Humboldt, Lake, Lassen, Mendocino, Modoc, Plumas, Siskiyou, Shasta, Tehama, and Trinity counties.

So why go through the trouble of dividing up California into six states?

As the initiative measure points out, California is about six times the size of the average state in the United States. And the state is also twice as large in square miles as the average of all 50 states. According to the proposition, these factors have left the state virtually ungovernable.

“The citizens of the whole state would be better served by six smaller state governments while preserving the historical boundaries of various counties, cities, and towns,” the report concludes.

And Draper, being an entrepreneur, thinks that this system could force the six different states into competition with each other. Current residents could move to another California, choosing between the states based on quality of life, tax rates and regulations. Those in the conservative Inland Empire, for example, would no longer be subject to the taxes imposed on them from Sacramento.

On its face, the legislation seems far-fetched. But if a majority of Californians embrace the idea, it’s entirely possible that the state could become six. But with wealthy backers–and a state more divided than ever–it’s very possible that the idea could game steam. But having popular support isn’t the only challenge it faces.

Even if Californians ultimately decided it was best to split up the state, the legal challenges that accompany it are myriad. The proposition notes that “legal processes for the division of the State will take time.”