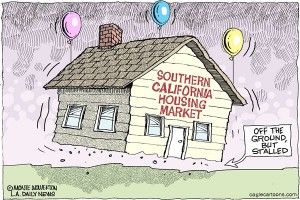 [1]CalWatchDog.com stories repeatedly have warned that the optimism over California being “back,” as Gov. Jerry Brown insists, may be overblown. That doesn’t mean a recession is approaching, only that policymakers ought to be careful.

The number of Americans applying for mortgages has fallen 63 percent since a May peak, reflecting a cooling housing market and higher borrowing rates.

The drop-off follows a 1 percentage point increase in mortgage rates from historic lows last spring. The average for a 30-year mortgage is 4.47 percent, according to mortgage buyer Freddie Mac.

That means the mortgage application rate is even lower than it was during the 2007-09 housing crash.