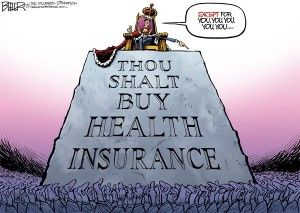 [1]Sally Pipes writes today in Forbes an article titled, “The Obamacare Law Devours Itself With Exemptions Amid 5 Million (And Counting) Cancellations.”[2] She is the president and CEO of the Pacific Research Institute, CalWatchDog.com's parent company. She has written three books on Obamacare[3].

Nearly five million people have had their health insurance policies cancelled because of Obamacare. Their coverage didn’t meet the law’s lofty specifications for covered benefits. So they were told they’d have to secure more generous — and more expensive — insurance.

Needless to say, they weren’t too pleased. And they let their elected officials know about it. Several U.S. senators, including six Democrats, asked Secretary of Health and Human Services Kathleen Sebelius in December to give those whose policies were cancelled a break. Just before Christmas, the Obama Administration did — informing those affected that they could ignore Obamacare’s individual mandate requiring them to have coverage in 2014 or pay a tax penalty of $95 or 1 percent of income.

The decision represents yet another example of the Obama Administration’s tendency to ignore the portions of the law it finds inconvenient. Such piecemeal repeal in response to political pressure is unfair — and could end up undermining the law entirely.