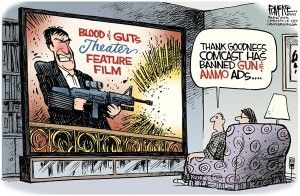 On Jan. 28, the California Senate passed Senate Bill 199[4], by state Sen. Kevin de Leon, D-Los Angeles. The vote was 23 to 8. The bill would require BB and airsoft guns to be painted bright colors to make them “readily identifiable” so law enforcement officers could distinguish them from real firearms.

In the Senate debate on Jan. 23, de Leon addressed the recent shooting death of 13-year-old Andy Lopez[5] in Santa Rosa, who was carrying an airsoft BB replica of an AK-47 automatic rifle.

“Law enforcement officers have extreme difficulty distinguishing between the real thing and what is fake,” de Leon said. “This is about saving lives.”

Sen. Steve Knight, R-Lancaster, disagreed. The former Los Angeles police officer said, “Today a brand new 9 millimeter gun can look like a toy. A brightly colored gun isn’t necessarily a toy. Are we going to write a bill when a police officer gets shot by a real gun painted bright orange?”

“The tragedy has rocked Santa Rosa and Sonoma County to its very core,” said Sen. Noreen Evans, D-Santa Rosa, a co-author of the bill. “A toy should look like a toy. A toy should not get a child killed.”

Santa Rosa police said that Lopez’ airsoft gun did not have the required orange marker.

Similar incidents have occurred elsewhere in America. In 2012, police fatally shot a Texas eighth-grader who was carrying a pellet gun resembling a black Glock. In 2011, Miami police shot and killed a man carrying a realistic-looking replica gun.

However, bright colored firearms — real guns — already exist. There are bright pink Glocks, white AR15s, pretty pearl-handled revolvers, Burberry print rifles and even a 9 millimeter with a leopard print grip — all designed to appeal to women.

For many years gang members, and some suspected narcotics dealers near the border with Mexico, have painting their weapons to resemble airsoft weapons[6].

“The problem is, we can’t control the bad guys from painting their weapons,” said Sen. Joel Anderson, R-San Diego. “If this bill was about educating our youth how to react to law enforcement, I’d support it.”

Anderson told a story about a man in San Diego apprehended by police. He came at officers with a trowel — and they shot and killed him.

“The bill puts false hope out there,” Anderson said.

Airsoft is a sport

Redding resident T.J. Armstrong is an airsoft enthusiast. “It’s a community sport,” Armstrong said. “It is a father-son sport.”

Armstrong plays on an all father-son team in Redding and told CalWatchdog.com what SB199 will do to the sport. “This bill just kills another sport and successful industry,” he said.

Armstrong said the area property he uses was a local eyesore. So his team asked the property owner if they could use the land for airsoft sporting in exchange for a huge cleanup and ongoing maintenance of the land.

Now, not only do all of the airsoft players in Redding use the field, local police and sheriffs participate for training and ongoing exercises.

Armstrong said that if SB199 becomes law, it will shutter many businesses and thousands of people will lose their jobs. “This bill will not improve public safety at all,” he said.

And in would make it illegal to own all weapons that shoot a 6 mm BB. “No more Red Ryder Daisy BB Guns, no more Pellet Guns, no more Airsoft guns,” Armstrong said.

Armstrong provided a partial list of of groups and businesses located throughout the state of California that would be affected:

And the communities which have active Airsoft facilities: