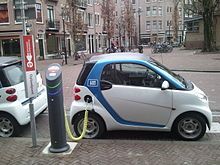 SB 459[2] is by state Sen. Fran Pavley, D-Aguora Hills. It requires the state to provide a voucher for a new alternative-fuel vehicle. The voucher would be given to low-income car owners who could not pass a smog test on their existing vehicle.

According to the bill analysis[3], the Enhanced Fleet Modernization Program established by AB 118 in 2007 has not “attracted substantial consumer participation.” Rebates have been issued to promote the very cleanest new vehicles paid for through smog abatement fees. In response, Pavley’s bill will hand out subsidies to remove “high polluting vehicles” from the road.

AB 8[4] is by Assemblyman Henry Perea, D-Fresno. It extended AB 118 until 2024. AB 118.[5] For the current fiscal year, the program is expected to invest approximately $90 million to encourage the development and use of new technologies, and alternative and renewable fuels, to help the state meet its climate change goals. It is funded through vehicle and boat registration fees, as well as smog check and license plate fees.

While this is not the first voucher program CARB has created, it is the first that specifically targets low-income families who cannot afford an electric car.

Also in March, the California Energy Commission voted[7] to expand the state’s clean-vehicle rebate program [8]with an award of $4.5 million to the California Air Resources Board through an interagency agreement to provide funding for the Clean Vehicle Rebate Project.

The latest fund award was made through the energy commission’s Alternative and Renewable Fuel and Vehicle Technology Program[9], created by

In the San Francisco Bay Area, the Transportation Justice Working Group[10] is part of the Social Equity Caucus, and is facilitated by Urban Habitat. They are fighting against “entrenched interests in transportation decision-making that have yielded socially and racially unjust outcomes for the past century in the Bay Area.”

To this group, transportation justice is about the highway system which has “displaced and cut up low-income communities of color and continues to burden them with toxic air pollution, traffic hazards and other disproportionate threats to their safety and health.”

These decisions have prioritized the construction and expansion of commuter rail systems, like BART and Caltrain, that are designed to serve affluent suburban riders, at the expense of urban bus systems,” the group[11] said.

While the Transportation Justice Working Group [12]is largely talking about restoring a once-effective bus system, the California Air Resources Board continues to push instead for new electric cars for the low income.

“Most plug-in electric cars cost more than the used cars that lower-income families and communities — the people who could most benefit from EV fuel savings, in other words — can typically afford. It doesn’t have to be that way, however, and California’s Air Resource Board is working to help low-income families get access to EVs by issuing vouchers starting at $2500.”

“With net operating costs approaching zero for cars like Nissan’s Leaf in some cases, electric car ownership could go a long way towards enabling low-income wage earners to get better education, as well as better access to healthy food and healthcare,” said Gas2[13], a car blog. “These low-income families would also be able to get to a number of private-sector jobs[14] that, without an EV, would be off-limits to them. That means they’d quickly pay back CARB’s $2500 voucher through increased income, payroll, and sales taxes.”

* $44.5 million to help Californian buy low emissions vehicles such as plug-in hybrids and zero-emission cars and light trucks, with rebates of up to $2,500 as long as the funds last.

* The state’s hybrid and zero-emission truck and bus voucher incentive was increased from $5 million to $15 million. The vouchers of up to $55,000 are for fleet purchases of cleaner trucks and buses.