New data show strong jobs growth continuing in California throughout the year. That’s good news for the state’s workers. And it’s especial good news for one jobholder in particular: Gov. Jerry Brown, who is being coy about a re-election run but likely will go for a fourth term.

The California Index of Leading Employment Indicator jumped to 128.4 in the first quarter of 2014 from 122.5 in the fourth quarter of 2013. The Indicator is compiled by the A. Gary Anderson Center for Economic Research at Chapman University. Any number above 100 indicates growth; below 100 means jobs shrinkage.

The following graph follows the Indicator’s path over the last eight years, dramatically showing the jobs crash in California during the Great Recession, and the subsequent recovery. 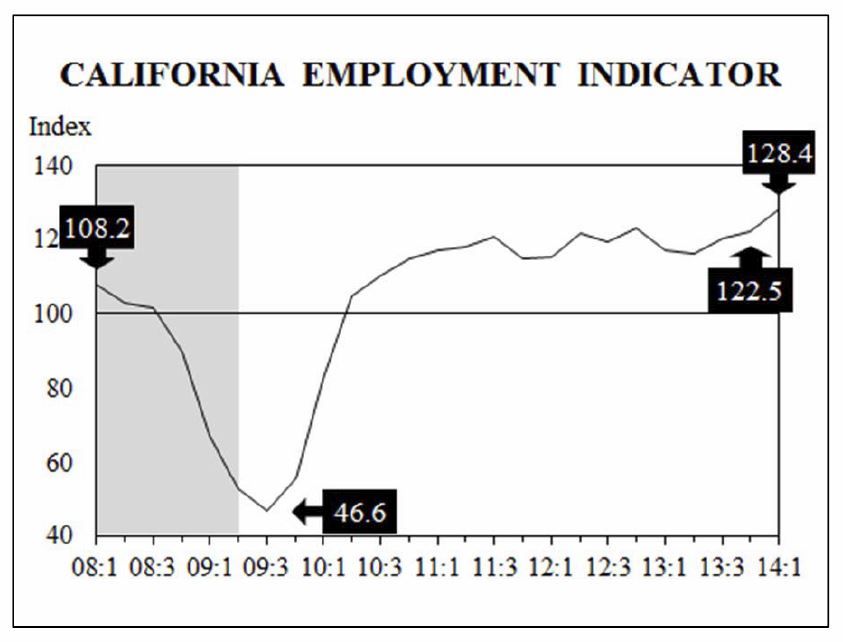 “We used the fourth quarter 2013 components to show us what will happen in the first quarter of 2014,” Esmael Adibi, the director of the Anderson Center, told CalWatchdog.com.

“All variables combined in the Indicator series show a decent jump from the previous quarter,” Adibi said. “So jobs creation should pick up a little bit of steam and do better than in the fourth quarter of 2013.”

Adibi pointed to a second graph showing how closely actual jobs growth (the dotted line) tracks the Indicator’s projected jobs growth. So Chapman’s jobs projections have been close to spot on: 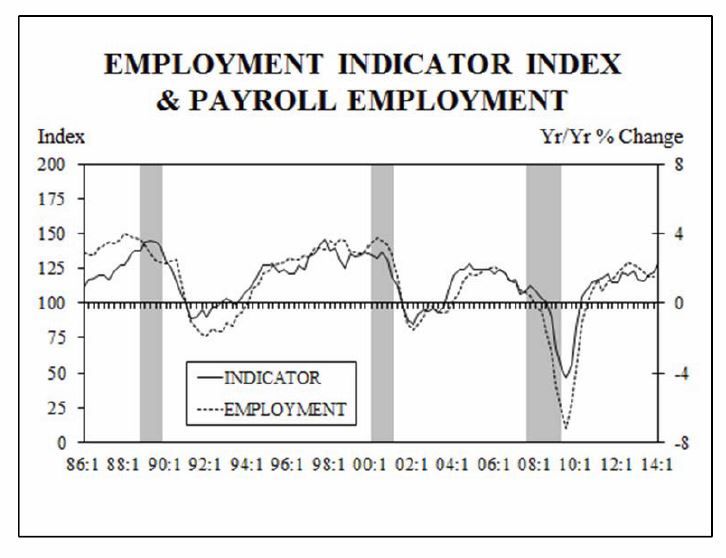 The graph does show that jobs growth still is not as strong as it was in the previous economic recovery of the a decade ago.

The jobs growth comes despite recent tax increases, in particular the $7 billion increase from Proposition 30, [3]which voters passed in Nov. 2012. The biannual Chapman Economic Forecast, which Adibi produces along with Chapman President Jim Doti, has warned that tax increases would retard economic growth and jobs creation.

“Tax increases obviously are negative,” Adibi explained. “If we didn’t have those, jobs growth would be even higher.”

Adibi still expects the 2.3 percent annual economic growth projected in Chapman’s Nov. 2013 Forecast to be close to what really happens, “barring the unexpected.”

He said that businesses especially crave certainty. And they’re currently getting certainty on taxes. The state budget is balanced for now, meaning more tax increases are unlikely.

As to Brown’s re-election bid, Adibi said the economic numbers are looking good should the governor seek a fourth term. “The economy is doing better,” Adibi said. “The budget surplus is kicking in due to higher taxes and economy. Voters also will like more spending taking place” on schools, universities and other popular programs.