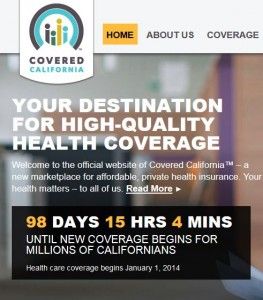 [1]Responding to a state senator’s call for an investigation into the marketing budget of California’s Obamacare exchange, the agency says it is in great financial shape and even received high marks for an audit conducted last year[2].

“By 2015/16, we project a reserve of over $184 million,” Covered California spokesperson Anne Gonzales told CalWatchdog.com. “We are putting aside a healthy amount of federal grant money and plan to draw on our reserves until our enrollment starts generating income.”

But GOP state Sen. Ted Gaines, R-El Dorado Hills, who is vice chairman of the Senate Standing Committee on Insurance, said the agency will be $78 million in the red during the next fiscal year. He was incensed to learn that Covered California spent $1.37 million on an advertising campaign featuring a lurid Richard Simmons web stream [3]that is now on YouTube.

Gaines learned about how much the “Tell a Friend, Get Covered” campaign cost from a Jan. 30 CalWatchdog.com article[4] and then demanded an audit of Covered California on same day. He had initially asked for the financial information in a letter to Covered California Director Peter Lee, but it had gone unanswered when the article appeared.

To remedy the situation, Torres’ bill increases the number of Covered California directors from five to seven and broadens the types of expertise for board eligibility to include marketing and information technology. It has bi-partisan support.

Torres’ spokesperson, Alex Barrios, said in an interview that Covered California’s poor performance “is the responsibility of the board.”

However, on paper, Covered California is doing a stellar job.

To date, it has had three audits:

Covered California’s current budget is $399.7 million. Since 2010, the federal government has awarded $910 million in grants and no further funding will be received after Jan. 2015. The agency has been saving money for reserves, which will fund its budget after the grants end. Unlike other state agencies, it is prohibited from drawing on the state’s general fund.

In the 2015/16 fiscal year, the deficit will be $78.4 million, decreasing to $34.5 million in 2016/17. The deficit should shrink in succeeding years as more insureds are signed up in the system, Covered California says.

“We are a startup enterprise, and it would not be fiscally conservative to imagine we will make money as soon as we open our doors,” said spokesperson Anne Gonzales. “We are being frugal, setting aside reserves until our revenues ramp up. In addition, Covered California is currently helping the state’s fiscal situation. We are operating exclusively with federal funds, and many of those dollars go to create jobs for people who buy goods and pay taxes. We are an economic engine in that respect.”

This doesn’t mollify Gaines, who wants to know more.

He received a response to his letter to Director Peter Lee a day after CalWatchdog.com’s story appeared.

“From our early data, Tell a Friend – Get Covered has been a success and has surpassed expectations,” Lee wrote. “[W]e have measured a reach of over 202 million impressions throughout the campaign; a significant milestone amplified by over 60 media personalities who … have encouraged their own followers to learn more.”

Gaines said in an interview that Lee’s letter didn’t give specific details about how many people signed up during the campaign and a breakdown of dollars spent.

“They have these high-priced consultants for all this so-called great marketing advice,” Gaines said. “The millennials are not signing up at the rate that they should be and there are problems with the Latino outreach. I’m not convinced that the financial structure is going to bring us to the point of break even or profitability.

“I would like to ask these probing questions and have someone provide an account of how dollars are being spent,” Gaines said.

However, the state audit said Covered California’s “outreach plans appear more than adequate” and it “appears to have engaged in a logical and deliberate process when developing its marketing plan.”

Torres also asked Covered California for an accountability on how dollars were being spent and details about its Latino enrollment.

“We didn’t get specific answers,” said Barrios, Torres’ spokesperson. “We believe in accountability. We asked in mid-December for this.”

Director Lee was invited to speak before the Latino Legislative Caucus and he provided some answers to questions, but not all of them, Barrios said.